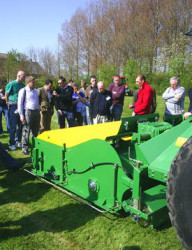 During the trip, which was organised by Koro's UK distributor Campey Turf Care Systems, participants were given a presentation and demonstration of the Koro machines by Frans van der Pols, whose company is the exclusive Dutch manufacturer of the equipment.

This was followed by an impressive demonstration of the high work-rate Koro line-up, along with a detailed explanation of their principles of operation by their inventor, Ko Rodenburg.

Ko Rodenburg, who is in charge of all the outside sports facilities in Rotterdam including 280 pitches, was so dissatisfied with other maintenance machinery that he developed his own.

On the second day, delegates were able to put theory into practice. This included a tour of pitches in and around Rotterdam that use Koro machines, and a comparison between natural and synthetic surfaces, as well as Desso systems (featuring a combination of real turf and artificial fibres).

A rare opportunity to visit the De Kuip Stadium, home of the famous Feyenoord FC, was also included in the itinerary.

"The way in which the Dutch look after their facilities is very impressive and we could learn a lot from them," says Richard Norton, Head Groundsman at Bolton Wanderers. "They are committed to providing top quality playing fields and involving local people."

"I wish it was the same with local parks in the UK. If they adopted maintenance regimes like Rotterdam's perhaps there wouldn't be so many calls for artificial pitches. I'm not surprised that Rotterdam is the European Capital of Sport 2005."

"The educational trip was a massive success, and we were delighted to attract delegates from all corners of the UK," enthuses Richard Campey, Managing Director of Campey Turf Care Systems. "Grounds managers are invariably impressed by the claims we make for the Koro line-up, and those who came along were able to see first-hand the superb results they achieve in real-life situations."