A giant poppy painted on a sportspitch is helping raise funds for The Royal British Legion. 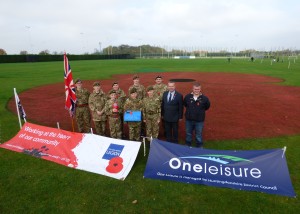 Believed to be the largest commemorative emblem of its kind ever applied to sportsturf, the huge display is the brainchild of Rob Bradshaw, 2014 Grassroots Sports Ground Team of the Year in the IOG Awards.

"This year I wanted to do it bigger and better," says Rob. "We measured out the outline of a 23m x 21m emblem then filled it in with red marker paint. Next year we plan an even larger poppy. Afterall, it's in a good cause."

Vitax Amenity donated £700 worth of marker paint to bring the poppy to life. Rob completed the stunning display in his own time, with help from two Vitax representatives, who brought linemarking machines with them for the task in hand.

After witnessing the epic effort, Councillor Robin Howe, whose executive responsibilities include One Leisure, enthused: "I would like to thank Rob for his continuous efforts. He even came in on his day off to help paint the poppy."

Rob hopes to outstrip last year's £100 fundraising effort, with The Royal British Legion and Army Cadets on hand last weekend and this and prizes such as a Norwich City shirt, signed by goalkeeper John Ruddy, and tickets to a Cambridge United game up for grabs in the raffle.

"We're feeling confident we can beat last year's total," adds Rob, 2014 Grassroots Sports Ground Team of the Year 2014 winner in the IOG Awards. The idea is catching on it seems, as he reports that the story has gone viral on social media.

Donations to The Royal British Legion at www.britishlegion.org.uk