A Head Groundsman and an Assistant Greenkeeper are both winners, following two separate prize draws sponsored by Vitax during Harrogate Week. 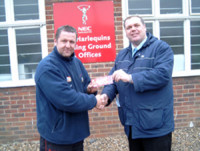 Ian Osbourne, Head Groundsman at The Richard Evan Sports Ground, Wimbledon, (training venue for the Harlequins Rugby Team), and John Coote, Assistant Greenkeeper at The London Club, Kent, both received £100 worth of vouchers for BIGGA merchandise after their names had been drawn from the hat.

Incoming BIGGA chairman Richard Whyman, himself a previous Vitax winner, performed the honours on the company stand, selecting Ian Osbourne in what has become an annual Harrogate event, while John Coote's name was drawn by International scientist Stan Kostka of Aquatrols who flew over from America to conduct a free fringe seminar at Vitax's invitation.

Clive Williams, Commercial Development Manager for Vitax says that this is the first time the company has sponsored two prize draws at the show. "We always have one on the stand, but because we were involved in the first fringe seminar programme we decided do a second draw for all attending delegates to Dr. Kostka's lecture," he explains. "I'd like to congratulate both winners, and hope that John, a placement student from Writtle College will find the vouchers especially useful."