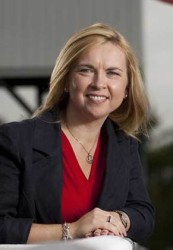 Chief Executive of Hamilton Park Racecourse, Vivien Kyles, was yesterday announced as the new Vice Chairman of the Racecourse Association. She succeeds former Arena Leisure Chief Executive Mark Elliott who retired from the Board at the end of March 2012.

Speaking at the RCA AGM in Central London, Chairman Ian Barlow commented, 'I am delighted that Vivien has accepted the Board's offer of becoming RCA Vice Chairman. She brings a wealth of experience that I'm sure we will find most valuable. My thanks also go to Mark Elliott for his years of service on the RCA Board, especially in his five as Vice Chairman'

'I very much look forward to assuming the position of RCA Vice Chairman. It is a very exciting time to be involved in our sport, and as such I look forward to working hard to make sure that the successes that racecourses saw in 2011 continue apace in 2012'.