0 Volunteering for the US Open is highly recommended Immediately after touching down in San Francisco, Steve and myself myself headed to the golf course. We were met by Patrick Finlen, Director of Golf Maintenance, who is also Vice President of the GCSAA. Within a couple of hours, we were out on the course to taking photos and familiarising ourselves with the layout.

There are three golf courses at the Olympic; the Lake - the tournament course, the Ocean course (18 holes) and the Cliffs course, a par three (9 holes) out by the ocean.

The Ocean course is going through a total greens reconstruction as well as having, at the time a large number of tents and US Open facilities built upon it.

On the Sunday evening, all volunteers were asked to attend a meeting at the course at 4.00pm. Initial introductions by Patrick and his crew were made. There were around one hundred volunteers from sixteen countries rostered on for the week, to support the fifty permanent staff members.

After dinner, we were issued with our allocated roles, which we were to work on for the entire week. We then went out and performed a 'dummy run' to get everyone familiarised with their roles.

My role was to move plastic boards for the greens rollers out on the front nine. Steve's role involved bunker raking on the back nine holes in the morning and assisting with the driving range clean-up in the evenings.

Monday through to Wednesday was the practice rounds for the players. These three days gave all staff enough practice time to get our maintenance operations in good order. It also gave us enough time to really work on getting the greens up to speed.

The Olympic Club has a contract with Toro, so had been supplied with the latest in pedestrian electric greens mowers, as well as other equipment. The Toro Eflex 2100 is a battery operated machine. This was the first time the Eflex had ever been used in a major tournament.

We started work every day at 4.00am. Morning maintenance was completed by 7.00am and then we had a break until around 5.00pm when we would undertake our evening shifts until around 9.00pm. During the morning operations of the practice rounds, the greens were shadow cut to set angles. Shadow cutting is achieved by cutting a strip and returning along the same strip. This method is used to avoid striping the greens, and it also achieves a double cut.

After the greens had been cut, moisture levels were recorded using a digital moisture meter. Areas that required water were marked with a red flag. The USGA were looking for around 30% moisture at the beginning of the week, which then decreased as we got closer to the tournament. Any dry areas were micro managed and light syringe applications were undertaken. After initial watering, the greens were then rolled using Salsco rollers. 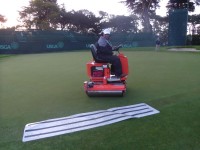 After the greens were rolled, they were immediately stimped to check speeds. In the afternoon sessions the greens were single cut, small volumes of water were applied and then the greens were either single or double rolled depending on the speed. As we got closer to the event, the double cutting continued, but the water applications became very minimal. Only old plugs and extreme stress areas were treated with small amounts of water.

Greens rolling was increased to get them up to speed. During the week, USGA Agronomists, Stan Zonteck and Kimberley Erusha, worked alongside the greens crew on the front nine. Stan worked on stimping the greens and Kimberley took clegg impact hammer readings.

Steve's role in the mornings consisted of raking the bunkers out on the back nine. The bunker bases were initially raked towards the direction of the pin/green, and then a clean-up rake was used on the bunker faces. In the evenings, he assisted with the driving range clean-up. This was, at times, a challenge, as a lot of the pro golfers liked to stay and practice until late in the evening. The main tee was cleared using a blower and all the divots were raked and collected. The tee top was then cut using a Toro 5610. The rope that marks out the teeing area was then replaced with a brand new rope and repositioned for the next day's professional golfers. The entire tee was then hand watered.

The driving range has five target greens, each with its own greenside bunkers. The practice greens were cut and bunkers raked. The fairway was cut using a Toro 5410 fairway mower. There were thirteen Toro 5410 fairway mowers used out on the course. This meant that fairways could be cut in one direction, usually tee to green.

Minimal hand watering of fairways, approaches and rough were completed in the evenings with a large watering crew. One of the great ideas I saw at the Olympic Club during the week was the number of quick coupler valves available. Every other fairway sprinkler had a quick coupler next to it, meaning that you could hand water with ease.

The USGA wanted the course to be firm and fast for the week so, in the evening sessions, approaches were cut and rolled, and even the fairways were rolled using a new 'toy' called the Salsco Transformer Roller. This was a model that had three individual rollers covering a width of 10ft. This allowed us to get all of the fairways rolled in no time.

Tees, collars and semi rough were all cut in the morning sessions. The approaches, some rough areas, light bunker trimming and fairway divoting were completed in the evening sessions.

Heading into the first round, the comments that we we received about the condition of the course were outstanding. The pros were very happy with the performance of the course during the practice rounds, but knew that the Olympic Club would not be an easy course to shoot a good score.

All eyes were on Tiger Woods' performance on day one. Steve and I were lucky enough to stand behind Tiger on the practice range the day before the tournament, and we both had a great feeling that he may deliver. Tiger finished his first round at one under, tied for second behind Michael Thompson, who shot four under par.

The course would become much harder as the tournament progressed with greens speeds and firmness both increasing.

The second round saw a lot of the pros choke, and not able to make the cut of seven over. However, Tiger hung in there, finishing his round as co-leader with Jim Furyk at one under.

Heading into the third round and it was all to play for. The Saturday was a fantastic day as we were allowed to have a photo taken with the US Open Cup. I was also selected for an interview with the United States Golf Association about my experiences. Co-leaders at the end of the third round were Graham McDowell and Jim Furyk, both at one under.

On the final morning, we went out and completed our last roll on the greens. As usual the week flew by. Before we knew it, it was over.

The icing on the cake, for me, was being able to work with the rolling crew on the 18th green on the Sunday morning. The moisture levels were rather low, so a light syringe was applied just to keep the surfaces fresh for the day. This was followed by a single roll.

It came down to the last group. Graham McDowell and Jim Furyk. G Mac dropped a couple of shots, but came back at times. So, too, did Jim Furyk who remained one under throughout his front nine and then fell away on the back nine. It was the control of young American, Webb Simpson, which enabled him to seal the victory at one under.

As always, when you work a golf tournament, it is a great opportunity to network with others in the industry and, of course, make new friends. It was great to catch up with Mike O'Keeffe, the organiser for the Ohio State University programme, which I completed back in 2008, interning at Whistling Straits and Doral.

Whilst there was a large Australian contingent, I would also like to mention a fellow British course manager - Paul Jenkins from Westridge Golf Centre on the Isle of Wight. Paul and I flew the British flag, even though I now live in Australia.

I would recommend that everyone in our industry volunteer for a golf tournament at some stage during their career. It really is a fantastic opportunity to experience turf maintenance at the best golfing events in the world.

I would like to thank Pat Finlan, Olympic Club Golf Course Manager, and Celeste Repsher, Head of Human Resources, for accepting our volunteer application and giving Stephen and I the opportunity to experience, what was, a sensational event.

If you have any further questions about volunteering for tournaments, then I would be glad to hear from you. I can be reached at simon.blagg@googlemail.com.