A mental health charity has helped to create an environmentally-friendly flood defence to protect a Northumberland golf course. 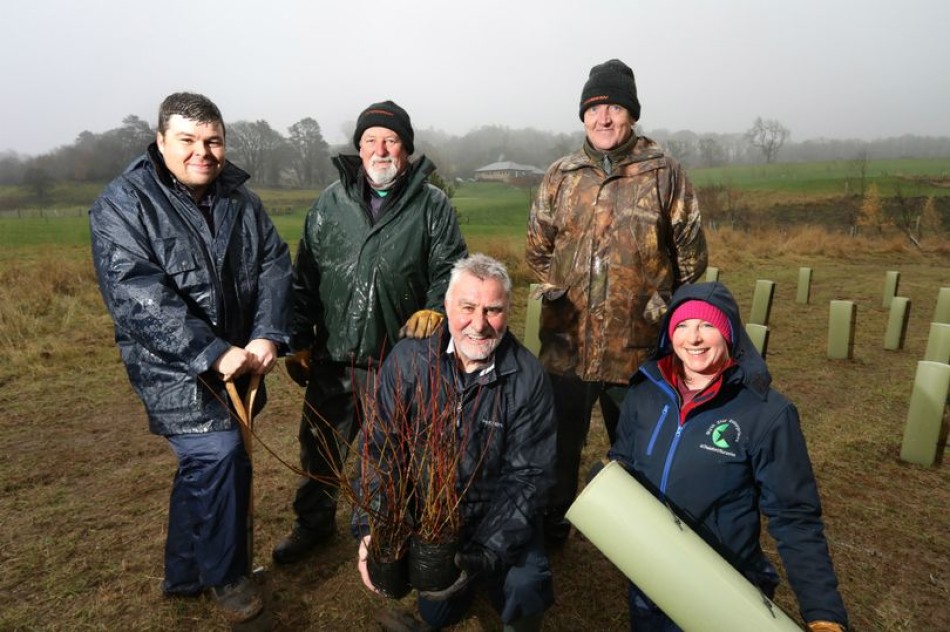 Volunteers from Blyth Star Enterprises and Stakeford Nurseries facility have played a key role in a project to plant 1,200 shrubs and bushes at Rothbury Golf Club to create a natural defence against flood water from the River Coquet.

Groundskeepers estimate that up to 10 metres of the river bank adjacent to the golf club's 13th hole has steadily eroded into the river over the past seven years.

During periods of heavy rainfall, the swell of the river covers the green entirely, dragging debris and fallen trees with it - causing costly damage to the course.

As part of its Next Steps project, which aims to provide those people who have participated in the horticultural training programme at Stakeford Nurseries with community volunteering experience, Blyth Star Enterprises teamed up with Rothbury Golf Club, Northumberland Estates and the Environment Agency to develop a permanent solution to save the 13th hole in such a way that would not be detrimental to the natural beauty of the golf course.

"Our Next Steps project is about identifying new opportunities and environments for our service users from the Stakeford Nurseries to further develop their understanding of horticulture and apply their skills to initiatives which in some way benefit the local community," said Gordon Moore, chief executive at Blyth Star Enterprises.

"The Rothbury Partnership project to help conserve the golf course fit perfectly with this ethos so we were delighted to get involved.

"The project has been supported by a number of national and local charities. It is one of a number of challenging schemes we have undertaken, inclusive of work with Northumberland National Park Authority, local parish councils and special schools.

"Working with the club groundsmen and the other partners, we agreed to create a natural flood wall out of low-growing scrub plants such as dogwood, hazel and thorn bushes which, once mature, will help filter out any debris brought by the river across the golf course during periods of flooding.

"Groups of service users from the nurseries, supported by our staff and volunteers, spent two weeks at the golf club planting the bushes which we will help to nurture from now until they reach maturity."

Graham Stephenson, groundsman at Rothbury Golf Club, said: "It was great to have the support of Blyth Star Enterprises on this project.

"The new scrubland will provide much-needed protection for the golf course against damage caused by rising flood water, but will also help to enhance the beauty of the course once the plants reach maturity, providing a new habitat for local wildlife in the process.

"The groundskeeping team from the golf club did all the initial prep work to level the land and mark out the spaces for the shrubs and bushes to be planted but beyond that, the staff and service users from Blyth Star handled the rest.

"They were incredibly competent and we look forward to welcoming them back to the golf club in the future."

Blyth Star Enterprises helps support over 350 people living with severe and enduring mental ill health and or learning disabilities. The charity is always on the lookout for new opportunities for its Next Steps project to expand its reach across the county.

To find out more about Blyth Star Enterprises, visit http://www.blythstar.org.uk .