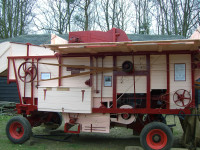 A group of volunteers at the Chiltern Open Air Museum have painstakingly restored a 1947-built Ransomes 54" Tractor Thrasher, which is believed to be the only machine of its type in a UK museum and now sits proudly on display at Newland Park in Chalfont St Giles, Buckinghamshire.

The restoration team were led by retired Agricultural Engineer John Smithson, former Police Officer Christopher English and Keith Baggaley, a retired Research Chemist. The project, which began in August 2006, was eventually finished in February 2008 having taken over 1,000 hours to complete.

However, there was one vital element missing as the project drew to its conclusion. Just visible on the machine was a very faded and discoloured Ransomes, Sims and Jefferies company logo depicting the prizes and medallions awarded to the company. The team contacted the University of Reading, where the Ransomes archives are kept, but to no avail. Keith Baggaley then wrote to David Withers, Managing Director, at Ransomes Jacobsen, the modern day successor to Ransomes, Sims and Jefferies, who took up the cause.

"As Managing Director it's very easy to say yes to such requests," he said, "but then someone in the organisation has to pick up the baton and actually sort it out." 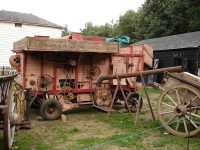 In this case it was Stephen Mitchell, Customer Care Director at the Ipswich-based turf equipment manufacturer. The original artwork had long disappeared, but in the main reception at head office is a replica of the company's medal board. A photograph was taken, the image was then artworked by a graphic designer and after a couple of attempts a very passable facsimile of the original was created.

Commenting on behalf of the restoration team at the Chiltern Open Air Museum, Keith Baggaley said, "It's this level of detail that makes for an authentic restoration so we are is exceedingly grateful to Ransomes Jacobsen, and Stephen Mitchell in particular, for going to so much trouble in acquiring the new decals and also for attending the launch party to hand them over in front of our supporters and volunteers."

Sue Shave, Museum Director added, "The Museum was founded in 1976 and is a registered charity, but we receive no regular grants towards running costs or capital projects. We rely on the generosity of many organisations and individuals and thank Ransomes Jacobsen, and the other companies who contributed to the project, for their superb support. We are also extremely grateful to the Chilterns Conservation Board for their generous grant of £1,500 from the Sustainable Development Fund, which ensured the successful completion of the restoration. Ransomes Jacobsen also donated limited edition models of 1930s Ransomes delivery vans which were used to generate funds to purchase period tyres for the thrashing machine."