Southport lass, Sarah Addison, began her career in groundsmanship working at Worcestershire County Cricket Club's New Road ground, before moving down to the SWALEC just over fourteen months ago to work with Keith Exton and his team. In this article, she describes her experiences of working at the WACA in Perth on a working 'holiday' visa

By the time the third Ashes test of last winter arrived at the WACA (Western Australian Cricket Association) ground in Perth, England had already been roundly beaten (aka stuffed) in the first two tests at Brisbane and Adelaide and were facing the possibility of losing the Ashes to the old enemy there and then. England did win one game at the WACA, a one day game against Australia by 57 runs.

Helping to prepare the Test strip was a Southport lass, Sarah Addison, who had been given the opportunity to take time out from her duties at Glamorgan's SWALEC stadium to gain valuable experience working in the hotbed of Australian cricket.

Sarah had banked enough hours during the summer of 2013 for Keith to allow her to head to the 'far side'.

"It was an ex-colleague from Worcestershire, Mark Wakefield, who is working out there at Richardson Park in Perth, who knew the previous Curator at the WACA, who asked me if I would be interested in coming out for their summer. It had been suggested to me the previous year whilst I was still at New Road, but they already had someone, so I had to wait eighteen months to take up the opportunity. It was great of Keith and Glamorgan to let me go."

Sarah's sports turf knowledge is built on foundation degrees in Sportsturf and Sportsturf Management at Myerscough College, plus her time at New Road and the SWALEC, and she eventually headed out to Perth last November, returning in mid-March of this year.

"During my time working at the WACA we had temperatures of over 40OC, especially during the men's Ashes test, and it was interesting to see how they prepared the pitch." 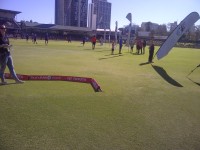 "The soil comes from a place called Waroona, which is situated about an hour south of Perth. The clay content is over 70%. They use couch grass varieties; on the wicket block it is called Grand Prix and, on the outfield, Green Lees Park."

"Preparation begins by cutting the grass to the preferred height and watering until the right moisture level is achieved. Then they do the first roll with a light roller (1.9 tonne), which is done really quickly. They keep rolling until the surface becomes dark, which is achieved by pushing grass into the wicket. Grass clippings are added to bare areas on wicket."

"Once the required amount of grass has been pushed into the surface, they wait for it to dry and then seal it with a light roll, which is carried out for twenty minutes at hourly intervals. Once the desired compaction has been reached, the 2.7 tonne heavy roller is used, adding more grass clippings if needed, again at hourly intervals."

"They leave more grass on and just roll it in. When they vacuum and water after the match finishes, it just stands back up." 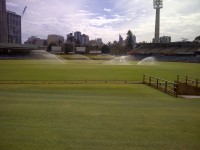 "Before leaving work each day we put the covers on. They don't have hover covers or ro-ros, they just use hessian on the wicket then put flat sheets on top of that. They don't use any wheel covers or anything like that."

"The day before a game, the wicket is marked out and, on game day, is cut, rolled and re-marked."

"There were six staff in total, Matt and his colleagues Jack, Louis and Rory, myself and James Reynoldson from Wormsley Cricket Club. We worked from 7.00am to 4.00pm each day but, if the weather was good during a match day (when isn't it?) then we would do split shifts from 6.30am to 1.00pm or 1.00pm to close of play - three on, three off."

"As you might imagine, James and I went really quiet at the end of the Test - England lost by 150 runs and with it went the Ashes." 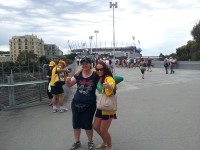 Sarah says that, in all her time in Perth, they only had four days of rain, and two of them were on match days! "I also had an opportunity to go to the Boxing Day Test match at the MCG in Melbourne which was another trouncing for England, this time by eight wickets, and I was also able to play a bit of cricket myself for South Perth Ladies Team."

"I was fortunate to meet both the England men's and women's teams. The ladies fared much better than their male counterparts, beating Australia by 61 runs in their Test at the WACA."

"We were also preparing pitches for the Western Warriors four day matches (a bit like our County Championship), and it was also good to be involved in the Big Bash Twenty20 competition, which Perth Scorchers won in the final at the WACA. That was, perhaps, my most memorable experience, but it was all great."

"I had a fantastic time in Perth and have made some very good friends. I'd love to go back again at some point, if I can get my working holiday visa - and if they let me in!"