1 WAKE UP TO DORMICE

This is the time of year many of our animal species have bedded down for the winter. Species of mammals, reptiles and amphibians have gone into complete winter hibernation. 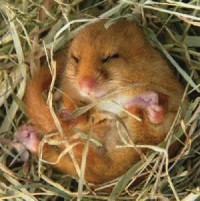 One such species of mammal is the dormouse. The common dormouse (Muscardinus avellanarius), despite its name, is now very rare, and has been declining generally across the UK. Most populations are found in southern England and South Wales. It has become extinct in many places, including much of north England and the Midlands.

Two species of dormice occur in the UK, the native common or hazel dormouse and the introduced edible dormouse.

The edible dormouse (Glis glis) was introduced to the UK in 1902 by Lord Rothschild, and is now a minor pest species. It is restricted to the Chilterns and is locally quite devastating to forestry practices, by stripping bark and eating new growth. This species looks more like a small squirrel, being between 14 and 20cm long, with a bushy tail and weighing up to 250g.

The native UK dormouse is fully protected under both UK and European law, and is a UK biodiversity action plan priority species. Therefore, it is illegal to disturb dormice and to impact on their breeding sites and resting places. This is particularly relevant for scrub clearance and bramble bashing in the winter, when dormice are hibernating on or near the ground.

The common dormouse grows to between 6cm and 9cm and has a short, fur covered tail which sets it apart from most other British mice. It can weigh up to 20g. They are classically found in the canopy of ancient, semi-natural woodland, in particular where there is hazel coppice. Dormice prefer open woodland, which allows areas of dense shrubs and coppice under, and connected to, mature trees for movement. They will also live and feed (on caterpillars and other insects, berries and nuts) in areas of scrub, hedgerows and other woodland, such as conifer plantations. In the summer months, dormice rarely go to ground, and they are only active at night and, therefore, very hard to see.

The only time they come out of the trees is to hibernate, in October/November, building tightly woven nests on or near the ground, until the warmer months come round. They have never been found in teapots, but some Mad Hatters may refute that! 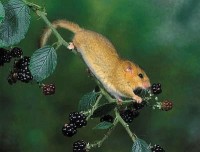 Young dormice are generally born between May and October. Each litter consists of three to five young. The gestation period is around twenty-three days and, when the young are born, they weigh only 3-4g. A newly born dormouse is both blind and naked, and it is not until around thirteen days old that the young dormouse is fully furred, although it is still blind. It is not until eighteen days old that a young dormouse can see. At twenty-four days old, the young animal is fully formed but a greyer colour than the adult and, by thirty days, it is able to leave the nest.

In terms of knowing whether there are dormice in an area, the best field signs are discarded shells of hazelnuts. Dormice leave a smooth cut edge around the hole made in the shell (see picture), whereas other mice and voles leave teeth-marks in the cut edge, whilst squirrels break the shells up completely. Obviously, if there isn't any hazel in a woodland/scrub area, then other methods to find dormice would be required!! 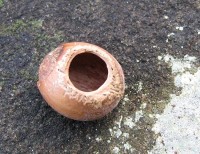 Positive woodland management would really benefit this species. If you are thinking about a development or undertaking work, such as scrub clearance, that may impact on dormice habitat, it is recommended that you contact Natural England or the Wildlife Trust.

For information on hedgerow management and conservation visit www.hedgelink.org.uk


Dr Mark Hampton can be contacted at: markhampton@peakecology.co.uk


To find out more about Peak Ecology and their services visit www.peakecology.co.uk