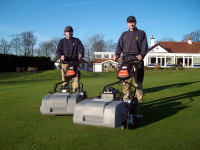 In January this year he took delivery of three Jacobsen Eclipse2 battery-powered, pedestrian mowers, the first in the UK following the introduction of the refreshed former Eclipse 100 series earlier that month. He was so impressed with their performance, that he has now added the ride-on version.

"Until recently I've always operated competitor machines here at Wakefield; my first purchase from Ransomes Jacobsen was a Jacobsen Tri-King followed by an Iseki SXG ride-on mower in 2010," he said. "I was looking to change my ageing pedestrian greens mowers and spoke with Allan Gray of GTM, who suggested we look at the Eclipse walkers. 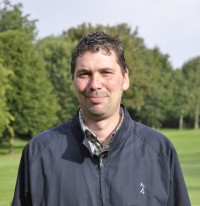 Initially we looked at the hybrid with the petrol engine, but after a prolonged demonstration of the all-electric version we collectively agreed that this was the better option for us. The fuel savings have been impressive.

"I'm delighted with the decision; we are really impressed with the intelligent feedback you get from the machine and the ability to alter the FOC, the Frequency of Cut. We've really experimented with the FOC, in all conditions - wet dry, warm and cold - and have found the optimum for our push up, clay-based greens.

This helps us to keep them stimping between 8.5 and 9, which is probably the optimum for the majority of members here. I'm really proud of our greens management; we use the Eclipse2 with groomers to control the invasive Yorkshire Fog grass species and in my time we've not had to use temporary greens in winter.

"Without a doubt the Eclipse is the biggest leap in greens technology in the last 35 years!"

With the recent purchase of the Ride-on Eclipse 322, Damian now has the ability to achieve a consistency of cut on all 18 greens, all year round. He uses the Eclipse2 walkers from October to May and the Eclipse 322 from June to September. 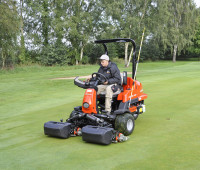 Wakefield Golf Club dates back to 1892 and is a private members club with a traditional parkland course of 6,663 yards, which features 85 bunkers and water hazards on several holes. The club has just over 500 members at present.

Damian Wormald manages a team of four plus a part-timer at peak periods. He began his career at Wakefield, left to further his career before returning nine years ago and was promoted to course manager in May 2011.