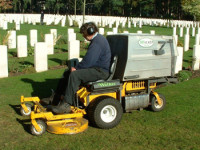 Maintaining the immaculate lawns at Brookwood, Britain's largest Commonwealth war cemetery is no mean task. The cemetery covers some 37 acres and contains over 5,000 Commonwealth burials.

Turf around 1,600 graves from the First World War and 3,500 from the 1939-45 conflict is maintained to the high standards set down by the War Graves Commission by means of a dedicated staff and an arsenal of machinery that must equal that of many a local authority.

Amongst the array of mowers used at Brookwood is a Walker MDDGHS diesel ride-on mower. The high manoeuvrability of this zero-turn mower comes into its own for mowing around the headstones, and under the numerous shrubs that embellish the area.

Powered by a 20.9hp Kubota engine, driving a 42in (107cm) twin blade out front cutting deck, the grass collection on a Walker has to be seen to be believed. For the manicured look of a Brookwood lawn grass collection is essential, the easy-empty integral grass-box packs in the cuttings and a high- level dump system is available as an option.

Other user-friendly features include large fuel tank, and a system that reverses the cooling fan automatically to clear the radiator fins should it become blocked with grass cuttings.

The Walker at Brookwood is used all week long in the cutting season and has proved to be an essential tool in the upkeep of the grounds. Walker mowers can be seen in Commonwealth War Cemeteries throughout Europe. Their design features and cutting ability lends itself so well for this type of intricate and high quality mowing.

Walker mowers in the UK are supplied by Allen Power Equipment for further details and a brochure call 08456 750730.

Brookwood Cemetery is situated 3 miles west of Woking in Surrey on the A324. The military cemetery is surrounded by Brookwood Cemetery which is privately owned and was opened in 1854 to provide burial space for the London boroughs when their churchyards were full. It is now the largest burial ground in the UK with nearly 240,000 people buried there.