It was the first game of the season and at NEC Harlequins the match was televised live on Sky TV. The main sponsors of the league wished to have their logo positioned i.e. painted, in the middle of the pitch. Their contractor arrived on the morning of the game to spray in the logo. He explained that it would take approximately two hours for him to do this and within a week to ten days the paint would grow out and be gone. At the time I also noted that he used aerosol spray cans and not water based products. He finished his work and off he went. The game was played (we won!).

The next morning I worked on the pitch, repairing damage and noticed that the blue part of the logo had burnt/scorched the whole of the grass leaf. At this stage I didn't know if it had killed the grass that I have spent working on these past few months. I took the action of first brushing, cutting and then verti-cutting this area. Followed by over seeding, chipping in the seed and then lightly top dressed the area with a root zone mix, finally watering the area frequently due to the warm weather.

On the Monday morning I got on with the task of finding out what had happened here. I first rang the makers/suppliers of the product used, their comments were that if you use paint aerosols onto turf then there is a likely-hood of some leaf tip scorch because of the oils/spirits used in the aerosol, and perhaps too much was applied onto the turf surface causing the severe scorching.

I then rang the contractor who painted the logo, he was concerned that this had happened and was in fairness, apologetic. However what did concern me was what his following comment, he admitted 'the same thing had happened at another major rugby venue a few weeks previously, but the grass had eventually grown back.

What infuriated me was the lack of respect that the contractor had, in not informing me of the possible problems as seen already at the other venue and now at NEC Harlequins. I found it difficult to understand why they insisted in using the same product knowing that it was causing problems. 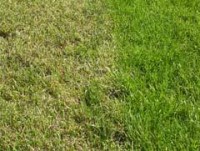 The MD and the Commercial Manager at NEC Harlequins were also in the same frame of mind as me and had expressed their concerns to the rugby authorities and others on this matter. Fortunately the grass is coming though at the moment the area is still much weaker than the rest of the pitch.

My advice to other grounds people is make sure you are happy with the product that an outside contractor is going to use on your pitch and it is one you are familiar with. Don't be fobbed off or bulldozed into something that may cause long term problems, after all, you'll be the one trying to remedy the error.

I made the mistake of trusting these people to be professional and respectful to me and the playing surface in using grass friendly products. You would though wouldn't you, with the knowledge that these contractors do this type of work week in and week out.