When that expensive pop-up irrigation system was installed into your bowling green it is likely that the club would have thought it would be there forever or, at least, outlive the club! For most systems the only visible evidence of that investment are the sprinklers.

This is because most of the system (i.e. pipes, wires and valves) is buried in the ground and the head-works (pump and controller) are hidden away in the shed. 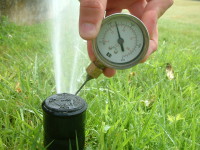 That old saying "out of sight, out of mind" is possibly the cause of why things can start to go wrong. Many clubs who install the systems themselves to save money often don't have an as-built plan or record of the infra-structure. This can lead to confusion in later years as to the exact location of the components of the system.

That aside, we often take for granted normal ageing and degradation of a system's various components (e.g. sprinkler nozzle wear that can cause inferior water pressure), which can sneak up on us overtime without us realising it.

Before we know it, we start to see some common symptoms of poor turf performance such as wet areas that never go away, dry patches, root diseases, weeds, moss and algal slime - the list goes on. Interestingly, most of these ongoing problems can be rectified just by conducting some simple checks or performing a tune up on your irrigation system.

In this article we look at simple checks and solutions to improve irrigation performance that leads to better performing turf.

So, let's do a tune up and warrant of fitness on your sprinkler system.

Irrigation engineers would argue that the fundamentals of good sprinkler coverage and uniformity do not occur by accident. Correct operating pressure, sprinkler spacing and nozzle size are paramount.

Sprinkler spacing is fixed on bowling greens at approximately 18 metres around the circumference of the green, so, in theory, should not really be an issue. However, sprinkler pressure is very important for optimal break up of water across the green surface. Therefore, it is a good idea to periodically monitor the dynamic water pressure.

So what should the sprinkler pressure be and how do we check it?

First and foremost, the operating pressure should not be measured at the pump as some people would believe. The reading on the gauge at the pump generally does not represent the true pressure at the sprinklers because of friction losses in the pipes. Irrigation engineers recommend a minimum operating (dynamic) pressure directly from the sprinkler of 70 psi (480 kPa). The best way to measure the pressure is with a Pitot gauge device. Each sprinkler should be measured this way. 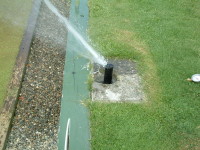 If the operating pressure is too low there may be one or more inherent problems causing this. Often it is a process of elimination when trying to get to the source of the problem. We tend to look for simple things first, such as the control valve setting or function. Another consideration would be the pump. If you run a booster pump, or rely on your own pumping system, you may have a problem with worn impellers. Centrifugal pumps are generally very reliable but, over time, will eventually need servicing. A pump expert can test your pump for you.

For those clubs with town water supply, pressure losses are common. Large draw offs in summer from domestic use (especially early evening) can reduce pressure at the sprinkler resulting in substantially poor uniformity.

Schedule irrigation after midnight when water pressure is optimum. By irrigating more efficiently you should see reduced disease problems, and an added bonus of irrigating at night generally means less wind influence on the irrigation sprinkler patterns.

Uniformity problems can also be related to a mish-mash of sprinkler types around the same green. When a system is originally installed typically the same make and type of sprinkler is used. The early systems normally used impact sprinklers but, in recent years, these have been superceded by new technology, e.g. gear drive sprinklers. As those original impact sprinklers have become obsolete/faulty/aged it has been common practice to replace them with a modern gear drive sprinkler. It is important to match the application rates of all the sprinklers when these changes are made. 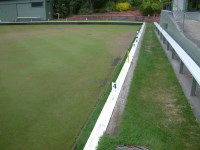 A common fault we often see with typical 8+1 pop-up sprinkler configurations is incorrect sprinkler runtimes. In many cases we find that the corner and middle sprinklers are set to run at the same time. A corner sprinkler (90°) set up this way will apply twice the amount of water as the middle sprinkler (180°).

Dry and wet areas are easily distinguishable on greens when runtimes are set incorrectly.

Ideally, all runtime decisions should be based around what runtime you give the centre sprinkler.

Incorrect sprinkler arcs may seem insignificant but they can actually cause problems with uniformity. I recall testing a system where two sprinklers had their arcs realigned to water the flower gardens nearby. The club wondered why the corners and one side of the green were so dry! The key requirement when setting sprinkler arcs is to make sure you allow for the prevailing wind.

How good is your irrigation system? 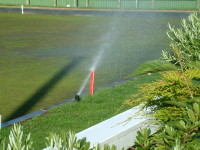 Winter or early spring is a good time to review, check and adjust your irrigation system. Always look at the simple things first. Here's a checklist:

The next step to finding out how efficiently water is being applied to the green is to do an irrigation system survey (pot test). One way to do this is to place 2 litre ice cream containers at 4 metre centres across the green.

The centre sprinkler is set to run for a predetermined time, e.g. twenty-four minutes. Accordingly, the middle and corner sprinklers are set to run at twelve and six minutes respectively. 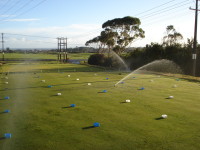 The water caught in the ice cream containers is calculated in a spreadsheet programme and will show the average application rate and co-efficient of uniformity - this is measured as a percentage, e.g. 75-80% is regarded as reasonably good. The test can be done in-house or you can contact your local agronomist.

Changes to the quality of your green during the season can be related to irrigation coverage issues. Don't take for granted that your old (or new) sprinklers still operate the same as they did when first installed. Over time nozzles do wear out, internal components malfunction and arc settings can be altered for whatever reason. Poor irrigation efficiency often doesn't happen suddenly. It sneaks up on us over time.

Don't leave those recurring irrigation issues until late spring/summer when you don't have time. A half day test this autumn/winter will save a lot of heartache down the track. 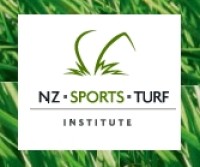