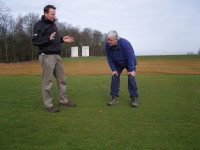 Head groundsman Paul Agar tends to two cricket squares at the Cheshire club, which also houses three rugby pitches across a 14-acre site set in sprawling countryside. Wanting to get the best from the cricket wickets' Surrey loam base, which was prone to cracking during dry periods, Paul consulted with Barenbrug's research and development manager, Jayne Leyland.

"Jayne's a regular visitor to the club as I've trialled a number of Barenbrug mixtures over the years," Paul comments. "We often chat about what's new and while talking over the characteristics of then-new cultivar Barkoel its high root density near the surface really interested me. Because of their Surrey loam base, my cricket wickets crack when they're dry, so I thought the density would hold them together."

A low-input mixture that produces a fine, dense sward, BAR 40 also offers superior drought tolerance and low thatch production, thanks to the inclusion of Barkoel. Having performed end-of-season renovations with the mixture each September for the last seven years, Paul's enthusiasm for BAR 40 has certainly paid off.

"The cricket wickets have improved markedly since I started using BAR 40," Paul concludes. "As well as annual renovations, I overseed regularly and the mixture has produced the root density I needed to stop the soil cracking as a result. When wickets crack they lose pace and bounce, so the surface's playing performance has also been improved. I'm very happy."