The culmination of seven years planning and negotiation finally paid off when Tesco's finally agreed to build the new stadium as part of their retail park development. Construction works started January 2003 with the pitch being laid down and seeded in July 2003. 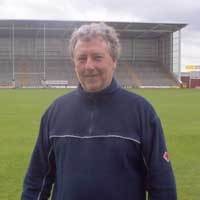 Mel had spent twelve months investigating other sand and reinforced fibre pitch systems but felt that, faced with the reality of the budgets available and the fact that sand based systems are more expensive to manage with the high volumes of water and feeding programmes required, the soil / sand ameliorated pitch would be more economical to run. In addition, based on the fact that the sand based surfaces tend to be harder, the chosen pitch would provide a much more resilient and safer surface for rugby league.

Another factor that influenced Mel's choice was the fact that the new stadium was not going to have an automated watering system, but having to rely on a static valve system with fixed sprinkler heads to be used at various stations around the pitch.

Mel's involvement in the grounds industry goes back to 1976 when he began working on school grounds. More recently, he has spent ten years in the construction industry, advising on new pitches and grounds. It was in this capacity that Mel was asked to comment on some renovation works at the old Wilderspool Stadium. This eventually open up the opportunity for Mel to become the full time Head groundsman at the stadium some five years ago.

The new Halliwell Jones Stadium pitch has a 150mm gravel carpet set over a primary drainage system with drains at 5m centres. The carpet is overlaid with 300mm of screened top soil ameliorated with 400 tons of sand. The pitch was seeded in July 2003. Secondary drainage was installed in the autumn of 2003 consisting of gravel/sand bands at 0.75 metre centres down the length of the pitch, and was followed by additional earthquake slitting across the pitch at 225mm centres.

Mel did have some concerns over the late sowing knowing full well that trying to establish grass growth without effective watering systems could come at a cost, and possibly resulting in a weaker sward establishment going into the winter period. Mel is confident that some time in the future funds will be earmarked for the provision of a fully automated pop up watering system enabling more efficient water scheduling at the stadium.

Mel has been trying out a number of different fertiliser products to stimulate the grass, using the little and often approach, hoping to find the right balance using both organic and non- organic fertiliser compounds. Turf diseases at the stadium have been minimal with a few outbreaks of leaf spot being seen.

Any weeds are spot treated with weed killer. Mel does not like overdosing all the surface, it's not only a waste of chemical but he does have concerns about chemical residues in the soil. Mel is pleased with the quality of sward he now has to manage, knowing full well it can only get better.

The club have also been very considerate by ensuring that Mel is given a fairly restricted programme of matches for this season, with only first team matches allowed and no pre-match games being played in the first few months of the season. All remaining club sides and academy teams will continue to train and play at Wilderspool for the next eighteen months.

At the start of the playing season in February the sward was still very open. This was evident by the amount of sand that was been trafficked into the changing rooms on the bottom of players' boots, and the amount of abrasions they were getting on their legs and elbows from the sand. It was quite a concern during the early part of the season but thankfully, due to this year's early fine weather and favourable soil temperatures, the grass began to knit over reducing sand migration and injuries to players.

Root depth varies from 100-200mm with deeper rooting seen above the sand bands. Mel has found that his watering requirements at the new pitch differ somewhat from the old stadium. At Wilderspool watering had to be undertaken nearly every other day (during dry spells), whereas the new pitch can go for longer periods before watering is required.

The pitch measures 68m x 100m with a 7 metre dead ball area at each end. The playing surface is holding up well with very few divots being made. This is due to the combination of the maintenance and the variety of grasses in the sward (predominently rye grasses), and perhaps due to the nature of the game being played. Rugby league is a running game, there are no line outs or scrummages to damage the turf surface.

According to Mel, presentation is the key. The pitch needs to be seen as a quality advertisement for the game. Since moving into the new stadium Warrington have managed to increase their average attendance figures from seven thousand in the old stadium to nine thousand.

They have also acquired some new equipment. Mowing time has been reduced dramatically with the use of a Jacobsen triplex mower. Mel is even able to mow the pitch during half the time. Another factor that has benefited rugby league has been the change of the playing season from winter to summer. The turf is able to recover more quickly after matches in the summer months, and the players have faster surfaces to play on, making the game more exciting.

The club is also looking to promote football at the Halliwell. Bolton Wanderers reserves are earmarked to use the stadium beginning in August.

This will be a major challenge for Mel, having to manage two complete different sports surfaces, in particular catering for the different heights of cut (44mm rugby, 25mm football) and the expectations of both sets of players. The biggest challenge, however, will be renovations. When and how to fit in any repairs, overseeding and topdressing works when the two seasons overlap.

Mel is confident that his team can meet these challenges, especially as he now has the support of Barry Pollen, the newly appointed Facilities Manager, who was previously on the groundstaff at Manchester City.