1 Warwickshire CC get to grips with recycling 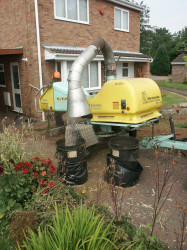 In April 2003, the council set up a kerbside recycling programme to assist in the disposal of garden waste. Householders looking to recycle tree and shrub waste can book the team for an hour's slot. The machine shreds all the material and bags it up, ready for re-use on the garden as a mulch. This is true recycling at its best, as the material never leaves the site where it was produced.

Since its introduction, 7000 visits have been recorded, resulting in approaching 150,000 bags [around 3500 tonnes] of waste being processed and retained at source.

The benefits to the householder are that the service is provided free by the County Council and that they end up with bags of useful free mulch to keep their garden weed free. Alternatively, they can leave the shredded material for 12 months or so and it will turn into compost.

It helps the Council too by reducing the amount of garden waste going into the waste management process and helps to raise awareness of recycling in general. It has reduced the incidence of fly tipping of garden waste as well, which reduces costs for the Council.

The team is run by Ken Simons, the County Forestry Officer, who was instrumental in selecting three Gandini shredders as the machines for the job. He explained that a shredder is best suited to the task, as the operatives have no control over the material passing through the machine. Unsuitable material, such as nails, that could damage a blade chipper will pass through the chamber without causing any detriment to the shredder's hammer system. The Gandini also scores well as research, by the Henry Doubleday Association, has shown that bruised fibres compost better than cut ones that would be the result of chipping the material.

When Ken first took on the shredder, he worked closely with Graham Satchwell of Chippers International who redesigned the dispatch system to bag up the shredded material for use in the domestic market. This leaves small bags of material at the site, which can be easily moved by the householder. Details on the bags give clear instructions about how the shreddings can be used.

The programme was originally funded by a grant from DEFRA, but after the first year, Warwickshire County Council had so much faith in the process, that they now fund it themselves.