by David Mears
in Industry News, Conservation & Ecology, and Golf
on 05 Mar 2016 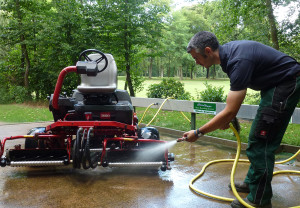 Many greenkeepers are becoming increasingly concerned about compliance with legislation applicable to them, and do not wish to run foul of the law. Some are aware of their duties and responsibilities, and so have taken appropriate action. It is clearly evident however, that some confusion still exists.

Looking at message boards, social media sites and listening to greenkeepers, there seems to be a recurring theme: "Can somebody tell us - in plain English - what the law is regarding washpads". Comments include that going on the web to find out often confuses even more. You see page upon page of regulations and it is so difficult to unravel. One greenkeeper told me only recently; "I typed in EU Water Framework Directive and wished I hadn't!"

So, what must be done to ensure compliance? Firstly, bear in mind that it has always been an offence to cause pollution and, in England Wales, the EA (Environment Agency) is responsible for policing the plethora of legislation relating to pollution. In Scotland, it is the responsibility of SEPA (Scottish Environmental Protection Agency).

"So, for my washpad, exactly what legislation am I to comply with?" may be your question. The EU Water Framework Directive (WFD as most know it) is the one piece of legislation that most seem to be more aware of recently. Introduced during 2009, it had not been noticed by many until last year (2015) and, now that full implementation is imminent, it has come sharply into focus.

The WFD applies throughout Europe and each member state is responsible for compliance, with many already having introduced this into legislation. For example, in England and Wales, The Groundwater (England and Wales) Regulations 2009 were enshrined in law in 2009. In Scotland, it was The Water Environment (Groundwater and Priority Substances) (Scotland) Regulations 2009 that also became law in that same year.

So, in a nutshell, it's not a question of when do I need to comply, as it has been law since 2009! The main focus of this legislation is that it is illegal to wash hazardous substances into the groundwater. There is an extensive list of such substances to peruse in the various legal documents, but those affecting greenkeepers and others washing down turf maintenance and similar machinery are:

These substances are washed off daily from every golf machine; oil, petrol, grease, diesel, etc. You should consider also The Control of Pollution (Oil Storage) (England) Regulations 2001 and, if in Scotland, the more stringent sister legislation. Most golf courses have a diesel tank near the machinery store. Is yours compliant? What happens if it is ruptured and contents spill? Why not incorporate space for your diesel tank and other possible pollutants on your washpad?

So, if you do not have a dedicated washpad -one with a low kerb surround to contain all pollutants to ensure these reach the treatment/storage facility - and a satisfactory means of disposing of or properly treating the washwater, you will technically be breaking the law. What are the options for compliance?

Essentially, there are three choices:

Washdown Separator: Separators appear, initially, to be relatively inexpensive but are acceptable as a stand-alone solution only if they discharge to foul sewer. Unfortunately, for many greenkeeping facilities located away from the clubhouse, this usually is not an option unless you install, at extra expense, a large holding tank (with no outlet) for the separator to discharge into.

The holding tank contents (classed as hazardous waste, so costly) would need pumping out from a top manhole and, for safety, fitted with a high water level alarm. The other downside of a separator is that a) it needs pumping out regularly and b) being a discharge system, there are no water savings. You'd also need to buy and install a pressure washer or pump to produce worthwhile water washing pressure too! So, what originally seemed an inexpensive solution is not quite that.

Reed Beds: Also sometimes considered an inexpensive option, reed beds are ideal for sewage waste (organic matter), but do have severe limitations when handling hydrocarbons (oil, grease, fuel etc.). This would mean time consuming and costly maintenance and, of course, reed replacements. Space requirement would be large and again, there are no water savings.

Water Recycling System: A genuine biological water recycling system is the best and future-proof way to go, with the big advantage of saving thousands of litres of precious water. Independent water meter tests have demonstrated that a typical 18 hole course can save over half a million litres of water a year by recycling.

You can elect to install a below ground or above ground system. Do make sure though that you do your homework thoroughly, checking that what is offered actually recycles! Some solutions may be, in essence, an overpriced separator solution. A system that is an approved water saving technology and on the WTL (Water Technology List) provides an extra bonus for those installing such a system too; one hundred percent of the cost of a system and installation can be offset against taxable profits under the ECA (Enhanced Capital Allowance Scheme) in the UK.

If you are considering a recycling system, look at what's on offer (there's very little choice of genuine biological recycling systems), make comparisons, do the sums (not only purchase costs, but running costs too) and select your preferred system. The best advice then is to talk to someone who has the system of your choice and, better still, go and see it in operation. If you need to deliberate further, go and see a competitor's system in action.

One interesting exercise of interest that may influence you is this: A while ago, my company produced an analysis comparing the cost of operating a separator (legally) versus our own recycling system. Over a five year period, and taking water charges, EA and emptying fees into account for a typical separator, our system, with a typical saving of 500,000 litres of water a year, showed a saving of over £3,000!

You may now have reached a decision on your course of action and "how long have I got?" may be your next question. 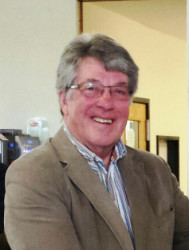 Sorry to say but, if you are not compliant with what has been set out in this article; your only hope is that you are not paid a compliance visit! Technically, everyone should have complied way back in 2009. You'd have no defence if you were caught polluting, as citing ignorance of the law of the land will not be acceptable.

Let's be honest, it's difficult to imagine anyone who has not seen the ongoing media coverage regarding pollution and legislative compliance over the last six years or more!

You may think that you won't be inspected, but it is on record that the Environment Agency does so. In fact, recent articles in the golf press have covered exactly that, with one instance of a golf club being advised that contaminated water from their washpad had entered a stream!

They were advised to act quickly and did so, installing a ClearWater system and a package sewage plant. The EA do not have sufficient officers to inspect every single golf course on a regular basis, but who knows, the next inspection could be your club; not a problem though if you are compliant!