Coventry City Football Club and the University of Warwick have commenced planning for a partnership that would see the University provide land to the Club for the development of a new stadium, thereby creating a new home for the Football Club with easy access for fans living in the City of Coventry.

Whilst an exact site has yet to be agreed, its proximity would be on the agricultural field area of the University of Warwick land on its main campus at the southwest edge of Coventry.

The SkyBet League One Club will own and be entirely responsible for the cost of the stadium and its operation; equally, Coventry City Football Club will receive all stadium revenues it generates.

Both the University and the English Football League (EFL) Club have vocalised that they are committed to a visionary, environmentally friendly stadium in terms of materials, energy, noise, building, and of course access.

The two parties have also stated that they envision supporters arriving at the stadium through a new light rail station at the ground running alongside a new link road. This will require significant discussion and partnership work with all surrounding local authorities, the West Midlands Combined Local Authority and the LEP to ensure the funding and support is there to provide that infrastructure.

Coventry City Football Club and the University wanted to make people aware of this exciting new development as soon as possible and hope that in doing so, it will pave the way to many discussions needed with a range of partners to progress this project.

The Club and the University do not expect to issue any further joint statements on this initiative until there is significant news to be shared.

On 9th June 2020, Coventry City were confirmed as League One Champions, after the season was concluded based on 'Points Per Game' and the Sky Blues were clear winners in unprecedented times. Coventry City will kick-off the 2020/21 season back in the SkyBet Championship. 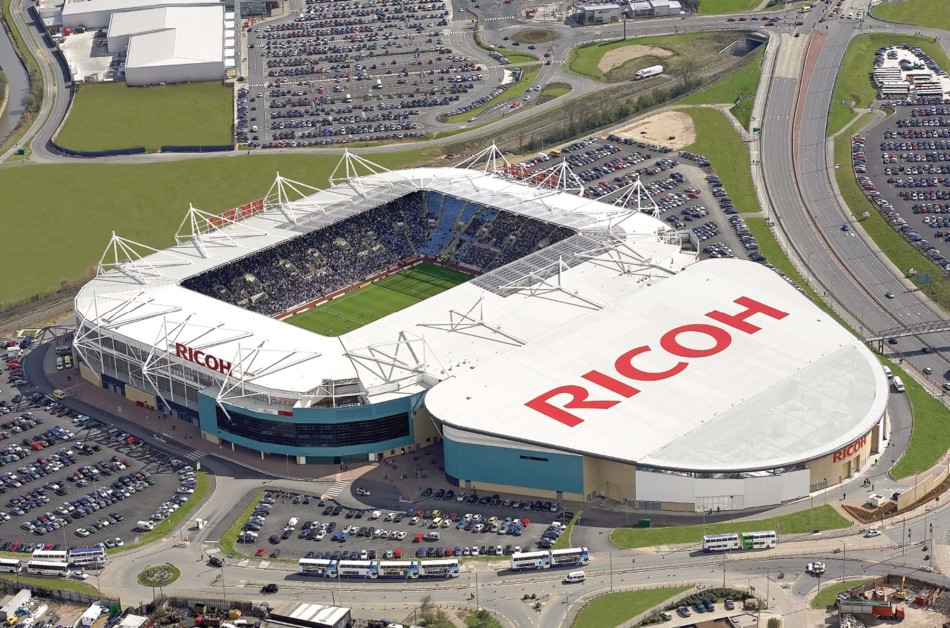 The Sky Blues played their first ever game at their then brand new stadium, the Ricoh Arena, back in 2003. Originally built as a replacement for their Highfield Road ground, the stadium was initially owned and operated by Arena Coventry Limited (ACL), with Coventry City as tenants. ACL was owned jointly by Coventry City Council and the Higgs Charity.

Following a protracted rent dispute between Coventry City and ACL, the football club left the Ricoh Arena in 2013; playing their home matches at Northampton Town's Sixfields Stadium for over a year before returning to the Ricoh in September 2014. Within two months, both shareholders in ACL were bought out by Premiership Rugby club Wasps, who relocated to the stadium from their previous ground, Adams Park in High Wycombe.

A further dispute with Wasps prior to the 2019/20 season saw Coventry City leave the Ricoh indefinitely, making Wasps sole tenants.

In a statement posted on the club's website July 24, Wasps said:

"We are totally surprised and deeply disappointed that the owners of Coventry City have taken this decision when we were very close to reaching commercial agreement on a deal. We had held positive and constructive talks with the football club at management level for several months and both sides believed they had a workable arrangement which was good for all and would see Coventry City back at the Ricoh. We did not require the football club or its owners to sign any indemnity around legal action over the Ricoh Arena, and firmly believe that we had made the deal as commercially attractive as possible.

We, like everyone else, believe the football club should be playing its home games in the city that bears its name and its decision to choose to remain in Birmingham is a wasted opportunity on a massive scale. The news that CCFC is working in partnership with the University of Warwick to create its own stadium was not communicated to us until after it was released publicly but we continued to endeavour to bring the negotiations to a successful conclusion and believed that was the case.

Sadly, Coventry City's late decision to withdraw today has brought current negotiations to a close for the foreseeable future. We were not aware the club would be making a statement this evening and will be looking carefully at elements of what they have claimed, and may possibly comment further in the next couple of days."