0 Wasps will invest in Ricoh pitch if necessary 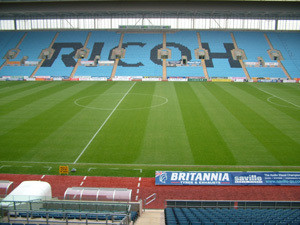 Wasps chief Nick Eastwood has spelled out his vision for the Ricoh Arena as a home to top-flight football as well as rugby.

The CEO says that the Aviva Premiership club's backer has no plans to make an offer to buy Coventry City but is committed to helping the Sky Blues flourish by building a 'win-win' relationship with the club.

Asked why Wasps have not spoken to the football club prior to agreeing a deal with Coventry City Council, Eastwood said: "Because of the confidentiality of the deal. The deal is not done until it's done - it's as simple as that - but the first thing I will do now is pick up the phone and speak to Steve Waggott."

Having sealed the arrangement that will see Wasps play their first game home game in Coventry in December, Eastwood is keen to embrace and develop the existing agreement between the stadium operators and football club for mutual benefit, although just how much City will see in terms of revenue streams remains to be seen.

"The deal done with the club and ACL is a legally binding agreement," he said.

"We wanted them in. It's a sports stadium and we're looking at 16 rugby games a year. It's like building a car factory and only producing cars for 16 days a year, it doesn't make any sense.

For the full article from the Coventry Telegraph click here.