0 Wastewater treatment system proves its worth at Royal-Mid Surrey

Being well aware of the needs to comply with requirements of the Groundwater Regulations, Royal Mid-Surrey Course Manager, Mike Merrick, took the decision earlier in the year to approach Hampshire based golf course water specialists, Hydroscape, with a view to installing their Mi-T-M Bio series biological wastewater treatment system. Six months on Mike has found his original decision to be well vindicated, with several additional benefits revealing themselves along the way. 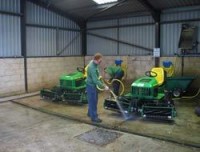 The in-built ozone dosing capacity also gives re-assurance to staff, in the knowledge that water being used in the system is disinfected before re-use and is as hygienic as can be.

From Mike's point of view he knows, that by installing the Bio Series system to meet legislative demands, he has eliminated any likelihood the course could be confronted with considerable clean up costs, should there be inadvertent discharge of foul wash down water into surrounding areas. Mike also speaks highly of Hydroscape's after sales service and care! 'Like anything new, we went through an initial learning process and had a couple of early minor teething issues,' says Mike. 'However nothing has been too much trouble for the company and I have been very comfortable with the partnership. On one specific occasion we noticed a drop in the system water level at 2pm on a Friday afternoon. Whereas many companies would not have responded until the following week, Hydroscape had a service engineer on site within 2 hours of our call, tracing the problem to a 'sticking' solenoid valve. We were fully up and running again in no time at all.'

Royal Mid-Surrey is not the only course to have selected the Bio Series biologically based system for its wash down requirements. Other courses recently taking the Hydroscape Bio Series route include The Addington, Sundridge Park, Archerfield Links, Royal Portrush and West Malling, together with The Heritage and Craddockstown golf courses in Ireland.

Further information on The Mi-T-M Bio series is available from: Hydroscope Ltd by e-mailing sales@hydroscape.co.uk