0 WATCH OUT FOR INVASIVE SPECIES

In the UK it is an offence under the Wildlife and Countryside Act 1981 (as amended) / Wildlife (Northern Ireland) Order 1985 (as amended) to "plant or otherwise cause to grow in the wild" any plant species listed in Schedule 9 of the Act/Order. 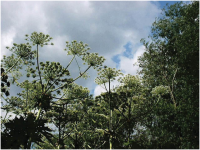 Any contaminated soil and plant material from two of the most noxious invasive species, Japanese Knotweed and Giant Hogweed, is classified as 'controlled waste' under the Environmental Protection Act 1990 (England, Wales & Scotland) and, as such, must be disposed of safely at a licensed landfill site.

Penalties for anyone convicted of an offence under the Wildlife and Countryside Act 1981 (as amended) include heavy fines and/or imprisonment, whilst an infringement under the Environmental Protection Act 1990 can result in an unlimited fine and liabilities for the costs of spread of those species covered by this legislation onto other areas.

Until recently there were only two terrestrial species and no freshwater plants listed in Schedule 9 in England and Wales (thirteen species were added to Schedule 9 in Scotland in 2005). However, following an amendment to the Wildlife and Countryside Act 1981, which came into force in April 2010, there are now about 40 terrestrial and freshwater plant species listed in Schedule 9 (England and Wales). 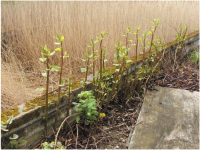 Terrestrial Species
Many of the terrestrial species in Schedule 9 were originally introduced as ornamental plants, but have since become naturalised in many places. These include Japanese Knotweed, Giant Hogweed and Himalayan Balsam, the latter of which was only added to Schedule 9 in April 2010.

Rhododendron, now also listed in Schedule 9, was commonly planted as game cover in woodlands, and together with other invasive species, such as Japanese Rose and Cotoneasters, has been widely used in amenity plantings.

These can often form very dense monocultures, shading out and excluding native plants and creating unfavourable conditions for many aquatic animals. In some situations, their growth can hinder recreational activities such as boating and angling and even pose a flood risk by blocking channels, weirs and other structures. Without help from an expert, most are difficult to identify from similar looking native species.


Factors causing spread
It is not an offence to have Schedule 9 plant species growing on your land, and there is no legal requirement to control them. However, activities associated with development and other works can cause their spread and potentially result in an offence being committed. These include fragments and propagules (e.g. seeds) being transferred on boots, cars and machinery, movement of contaminated soil and/or material from affected sites, movement of contaminated machinery and equipment between aquatic systems, inappropriate disposal of cut material and activities that disturb the vegetation and underlying soil.


Management
Early involvement by suitably qualified and experienced consultants to identify non-native invasive plant species on development and work sites to prepare, implement and oversee management plans for their control. In many cases, methodologies can be devised to allow the presence of these species to be worked around, or for their control to be achieved using non-chemical, or where necessary, chemical methods.