Taunton Racecourse won the national hunt category of the 2012 Racecourse Groundstaff of the Year Awards, recognising the efforts of Clerk of the Course Michael Trickey, Head Groundsman Kevin Councill and their three man team.

Opened in 1927, Taunton is one of the most beautifully located racecourses in the country. It offers outstanding views to the wooded slopes of the Blackdown Hills, yet is only a few minutes drive from the M5 and the centre of Taunton. Racing takes place from November to May and, although most meetings are mid-week, the programme allows holidaymakers to enjoy the excitement of jump racing alongside committed fans of the sport.

The decision to invest in irrigation equipment to offer the best possible going for two high profile fixtures ironically comes after the wettest twelve months on record. 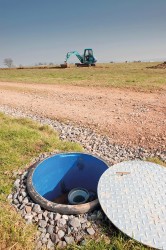 "There were always concerns about the structure of the clay soil, but the top three inches dries out and 'caps' in the spring, so to secure fixtures at this time we decided to purchase a Briggs boom irrigation system," explains Michael Trickey. "We have sufficient capacity from the boreholes to apply half an inch of water to the top two to three inches of soil to maintain good ground. Briggs has plenty of experience on racecourses and has developed a system for our own particular needs."

"The irrigator will take up to twelve hours to water the track, and will mainly be used in the spring, rather than trying to tackle the dried out ground in the summer which could affect the soil structure," comments Kevin Councill.

Taunton has a reputation among leading trainers for producing excellent winter going - it has won praise from champion trainers Martin Pipe and Paul Nicholls.

But this has required an ongoing programme of renovation, as Michael describes: "The track was traditionally very tight with concrete uprights and wooden rails. When the motorway was built some thirty years ago, the management took the opportunity to take some of the soil that was being disposed of to widen the track."

"This gave more scope for hurdle movement and a better line into the bend, as well as enabling the bends to be split for the first time."

"The wider course has eased up the bottleneck on the home straight and, after subsequent improvements, makes it easier to present fresh ground, although that has been severely tested this winter!" comments Kevin.

However, when Michael came to the track, initially as a steward in the 1980s, he discovered a downside of the developments: "Taunton was always considered slippery, with bends like a skid pan, and this was partly due to the use of a three tonne roller to repair the course after racing. Whilst there was a good covering of grass, as soon as a horse's hoof penetrated this, it was straight down to the clay pan."

Working with contractor Phil Cole from Cirencester, an extensive programme of vertidraining was instigated, working at varying depths and degrees of heave to avoid further pans forming.

Parts of the course were worse than others - there was a visible line on the back straight between the old and new, because the motorway soil hadn't been graded, and included all types of material, even bricks.

"Grass cover on the new course was very sparse, and would brown off," comments Michael.

On the Corfe Bend and home straight the contractor used an agricultural disc mower to shave off the grass cover before vertidraining and spreading sand and compost, using a scraper to push it into the tines holes.

"This has made the soil structure more secure and improved the ability of the sward to withstand wear," explains Michael.

Mowing takes place up to twice a week, using two John Deere out-front rotaries and taking up to five hours with both machines.

Working with an agronomist, grass mixtures have been improved, using a seventy percent ryegrass mixture fine-tuned over a number of years.
"The heavy clay dries out in the summer and moisture is scarce in the main growing season," explains Kevin. "On the Corfe Bend, grass varieties that ought to have been ideal did not wear well, so we had to develop a specialist mixture for the conditions."

Overseeding has also been enhanced by the latest equipment: "Several passes were needed with the older drills as the disc spacing was so wide, but the new disc overseeders are more closely spaced. We also find that the discs help to level and aerate the racing surface," says Michael.

The more stable surface and improved growing conditions meant that, in 2012, wear was so minimal that the drill was not needed, with seed simply topdressed on after the season finished in May.

However, 2013 will be a different story, and the wet conditions led to the cancellation of two fixtures at a course which is renowned for its ability to hold winter racing when other tracks are struggling.

"Racing in wet conditions can have a negative effect on soil structure, but the vertidrain will help to aerate and restructure," Michael comments. "We are also fortunate to have the experience of Paul Barber as a director - as well as being a leading racehorse owner, he has a large scale farming enterprise and has suggested that additional nutrients will be needed this year." 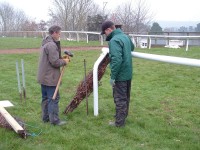 There are signs that spring is coming to Somerset at last - although it remains one of the wettest parts of the country, according to local authorities - and the Taunton grounds team were able to get on with a ring roller and topdresser between its February meetings.

"It has gone back better than expected, but the water table is still close to the surface. The paddock has always been rock hard, but now a stick will go in. We have had windy days, but not the sunshine needed to dry the land out," says Michael.

Other developments have included constructing permanent fences and altering the third last jump to align the birch at a more forward sloping angle, encouraging better jumping. The parade ring has also been redeveloped with rubberised walkways to protect the valuable - and sometimes exuberant - thoroughbreds before racing.

With the irrigation system due to be commissioned, it is full steam ahead for the Taunton team. Chief Executive Bob Young was successful in diverting prize money from the abandoned January Saturday fixture to an Easter meeting on 4th April, whilst further eagerly anticipated evening meetings are scheduled for 24th April and 2nd May.

"We rarely race on Saturdays or Sundays, so it is good to get the evening fixtures that draw the crowds," says Michael.

It is hard to believe that watering will be needed this spring, but going at other courses began to firm up as early as mid-February, and Cheltenham was gearing up its irrigators for the Festival before the rain returned in March.

"We have to be able to provide good going to continue to attract trainers to run the high quality horses that we are now seeing at Taunton," comments Michael. "We have a reputation for providing the best winter ground and we are keen to preserve and enhance that." 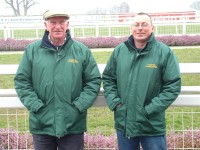 Clerk of the Course Michael Trickey first became involved in racing management as a steward at Taunton, Newton Abbott and Exeter and, after a career at Lloyds, worked at the three south west courses before focusing on Taunton.

"I rode in point-to-points from the age of eighteen to forty-four, and also evented," he comments. "I feel it is vital to have a knowledge of horses, and choose the stewards on this basis too - horses are not motorbikes, they can be unpredictable and we sometimes have to make decisions based on that."

Head Groundsman Kevin Councill joined the groundstaff in December 1985 at the age of eighteen and, in 2002, was promoted to his current role, following in the footsteps of his great uncle who had held the post for over forty years until the 1960s.

"The best aspect of working at Taunton is that no two days are the same," comments Kevin. "Because we are a small team we all do everything, so the workload is varied."

Kevin is supported by Simon Jarrett, Adam Meads and Lee Noonan, and Michael praises their attention to detail. "They take a lot of pride in their work and do a good job. The bends and rails are immaculate and, at the start of the season, they are conscientious in washing down every metre of rail. They also look after the paddock, and its lawns, heather borders and flower boxes are always beautifully presented. The grounds team also provide back up to stable manager Therese Scott, who also does a brilliant job."