Muddy football pitches are common throughout Europe during the wet winter months. In most instances, particularly in the United Kingdom, topsoils are relatively impermeable with high silt and clay content. Infiltration measurements, using a double ring infiltrometer, are negligible, varying between 0.1 and 0.5mm/hr after they have been subject to compaction in wet conditions and have developed a degree of thatch growth.


With winter rainfall there is negligible evapotranspiration and, consequently, topsoils take in moisture slowly. Having a high water holding capacity they can retain a wet and plastic condition throughout the winter. Hence, the rapid removal of surplus surface water is required soon after rain and before water softens the pitch surface; the object being to make pitches playable within the shortest time thereafter.


Water run-off on the pitch
Water run-off is not easily gauged, though it is very evident after heavy rainfall with the development of ponded areas on uneven ground. Whilst the preparation of the subsoil prior to topsoil replacement, and the ongoing level of maintenance, all influence the infiltration capacity of sports pitches, there remains a point at which there is run-off of surplus surface water. Once rainfall begins a proportion is withheld within the grass cover.


The height of grass growth on sports pitches varies from 25 to 35mm for football and 50 to 75mm for rugby. Though no measurements appear to have been recorded, the top growth, including the surface litter and thatch, retains a considerable volume of water adsorbed to the plant surface, and this could be in the region of 2 to 4mm over the playing area. Micro-irregularities, including foot depressions, must further retain water that eventually infiltrates into the soil. This volume could also amount to in the region of 4 to 5mm. Finally, some water evaporates, some infiltrates into the soil or is contained in surface slit drains.


Referred to as abstractions, the sum of these retentions must be complete before run-off commences and, to summarise, there would probably be at least 8 to 12mm falling in the first hour before any significant water reaches lateral drains and is discharged from site.

Slit drains function as a bypass system in impermeable topsoils. However, positive surface run-off must occur for surplus water to reach the slits, even though they are a short distance apart. Without it water is simply retained on the surface. Calculations, employing a modified Hooghoudt's formula, can be made to estimate the rate of removing surface water using close spaced slit drains. Expectedly, the rate of removal in slit drains is much less than would be possible in a permeable sand rootzone, and capacities of slit drains are generally estimated over 24 hours, with the drainage of not much more than 100mm in a day.

For effective run-off from a pitch to be initiated after abstractions are complete, there must naturally be an even grade to specified tolerances and a positive gradient in the playing area. A minimum gradient of 1:70 is needed for satisfactory run-off. Adams and Gibbs further maintain a diagonal fall of between 1:67 and 1:100 is advisable. Slit drain systems must remove surplus water from the surface soon after rain has fallen. Installed at 1m spacing they have proved very effective, though the introduction of 260mm spaced sand-injected mini-slits offer an even greater potential for rapid water removal.
In this way the relatively impermeable topsoil can be maintained in a firm and playable condition. Otherwise, isolated muddy areas soon develop. Also vital is the importance of sand dressings to promote surface water flow laterally to slit drains and preventing these drains from being smeared with adjacent clay loam soil dislodged during play (Adams and Gibbs,1994). 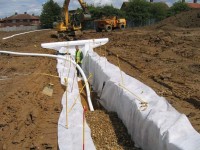 Run-off outside the playing area
In many instances water run-off is initiated from higher ground passing down on to the pitches. The long-term performance of cut-off drains, or those at the toe of the cut slope, depend on the degree of maintenance, as silting at the surface is bound to accumulate. The installation of shallow grassed swales or diversion ditches with appropriate gradient is an approved alternative solution. Controlling surface water movement moving on to the pitches must be the first priority.


The potential for surplus water run-off from sports pitches is of greater consequence after prolonged heavy rain. In a study of the rainfall in southern England the data from the recognised meteorological station at the Wisely Horticultural Research site was chosen. Over eleven years, during the wet winter months of October to April, the average number of rain days per month was 16.5. Of these, 15.1 days had rainfall totals less than 10mm in a day and, on 8.7 days, the daily rainfall measured less than 2mm. It was estimated earlier that at least the first 8 to 12mm of rain is retained by abstraction. 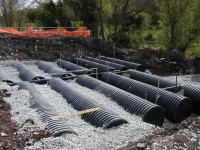 However, the 1 in 2 year or 1 in 10 year storm in southern England can produce rainfall of 25 to 35mm in one hour. With this extreme rainfall in excess of the amount that can be abstracted, surface run-off must occur. Naturally, the immediate surroundings below the playing area now become a vital factor. On graded sports pitches water run-off is generally not significantly more than would occur if the land had not been developed. With the use of diversion ditches, shallow swales, shorter grass cover, a gradient levelled to be suitable for sport and the installation of lateral and slit drains, there is a significant control in surface water flow and a degree of attenuation is achieved.


With run-off into a stream, pond, watercourse or open pasture there is generally no concern. However, where outfall locations are restricted or do not exist, in the case of built-up areas provision must be made for the attenuation of this surplus water to prevent peak flow and distribute the surplus water more evenly over the boundary. Furthermore, with a diagonal gradient over a graded area there will be concentrated flow of water run-off after heavy storms. Swales become a vital provision and temporary storage structures, incorporating large stone of 150 to 200 mm dimension, with large diameter twin wall plastic piping and reinforced plastic cells, are used for this purpose. The latter materials have maximum potential for storage and are used extensively under car park areas.


Conclusion
Water run-off is a vital factor in sports pitch design. The control of surplus water flow on to pitches remains the first priority. Acceptable gradient and grade are vital to create surface movement of surplus water on the pitch at times of high intensity rainfall and to prevent the development of water-logged areas. Notwithstanding surface drainage provisions in the form of gradient, swales and slit drains, the pitch surroundings will dictate the extent to which attenuation is taken to accommodate water run-off on the pitch at times of heavy rainfall. However, it therefore becomes essential to define the rainfall risk to be catered for in terms of the maximum rainfall intensity allowed for over a nominated return period.