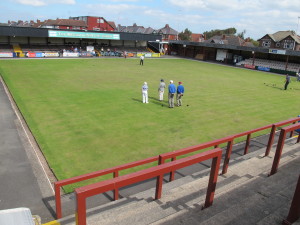 With a cold and showery August it is hard to recall those hot, dry days of June and July. After daytime temperatures consistently in the low to high twenties for several weeks many greens are starting to show signs of wear. The Waterloo Green has borne the brunt of intense play with activity on the green for extended periods of time with no respite.

Throughout July and August qualifying matches as well as visiting teams have kept the pressure on the green during a period of time when draught and heat stress could have damaging effects but the green has held up remarkably well, with little signs of wear and the green has retained almost 100% grass cover.

With the end of the season almost in sight and our attention turning toward the end-of-season renovation it's a good time to review how the green has responded and if we can see any discernible improvements as advised by John Handley, Agronomist with Pitchcare. As indicated in the last update, bare areas are being allowed to colonise with Annual Meadow-grass, Poa annua, the long-term objective is to outcompete this opportunistic grass in favour of the more desirable turf-grass species such as Bents, Agrostis, and Fescue's, Festuca. 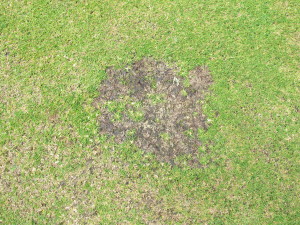 Although in the intervening time Annual Meadow-grass has been allowed to colonise areas that would otherwise be bare. This policy has stopped the cycle of loss of grass cover which can exacerbate an already stressful situation because available moisture is lost more easily from bare soil than from a green with full coverage. The use of a penetrant wetting agent and regular sarel rolling has ensured that available moisture has been able to get off the surface, where it's a potential problem, and into the soil where it's a useful reservoir for the testing, dry summer heat.

The green is now hungry and ready for a good feed, particularly with the spell of wet weather we've been having in August. This will be a full-rate feed to promote growth before the onset of autumn and heavy dews give rise to potential problems with disease. Mark has commented on the lack of disease on the green this year, stating that it's been a lot easier to manage without the 'boom and bust' fertilisers that can cause lush growth that is susceptible to Fusarium, now known as Microdochium Patch. The aim is to ensure that the green is on a rising plane of nutrition so that it will respond favourably to the renovation.

Over the course of the summer the Toad Rush, Juncus bufonius, has been pushed out by spot spraying selective herbicides and enabling other grasses to colonise these areas but a watchful eye will be needed to control it as soon as it inevitably makes a reappearance over the winter. The hot temperatures and low rainfall has put the Silvery Thread Moss, Bryum argenteum, into a state of torpor from which it will also rapidly recover over winter and require some specific treatment to discourage. 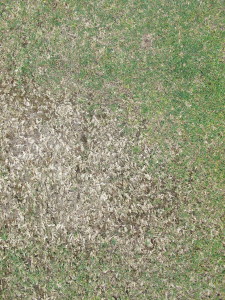 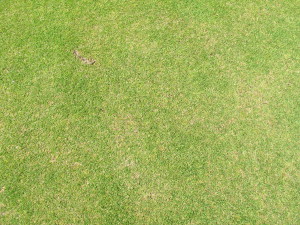 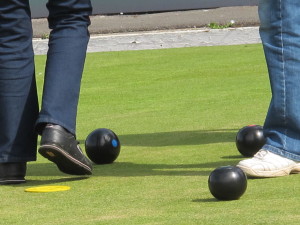 Johnsons Premier Green Seed has been selected to over-seed the green. It has the highest independently ranked ratings of all green seed currently available and, unlike all other consumables, an investment in seed of this quality will benefit the club for years to come. The seed has been rated for shhot density, visual merit, fineness of leaf, resistance to Red Thread and winter and summer colour. The all England Finals are scheduled for the middle and end of September meaning that any kind of disturbance to the surface of the green can only take place at the beginning of October - ground temperatures will be dropping and recovery and establishment of the newly sown seeds will be significantly reduced therefore it has been decided to aerate, overseed and top-dress before the end of September, with little affect to the playing surface, and verti-drain once the green is closed at the end of the season.

The green appears to be healthy, verti-cutting is now undertaken fortnightly when the green appears well enough and thick enough to warrant it. The height has remained firmly at 5mm and the speed and consistency over the green has been outstanding and according to Mark Audin many visitors have commented that it has never looked or played better. The bowls do not chatter over the surface and the roll is true though in places the green may be a little too receptive, autumn renovation works will aim at putting that right.