0 Waterloo Bowls Club in need of a financial boost 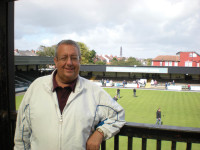 It's grim up north - and it certainly was the day John Richards attended the Waterloo Championships Finals at Blackpool in September. He found a venue in some serious need of a financial boost to keep it going.

Just how grim? The wind lashes in from the Irish Sea across the Blackpool foreshore at the best of times, but the added impetus of the aftermath of Hurricane Katia had the famous Pleasure Beach roller coaster rocking as it battled its way to the top of the run. Not surprisingly, there wasn't anybody stupid enough to be on board.

But, even this sort of weather doesn't deter the people I was coming to see - crown green bowlers who were here to compete for the sport's most prestigious prize at the sport's most acclaimed venue.

The Waterloo Hotel has been the home of the premier tournament for crown green bowls since 1907 and, every year since, the top players have been on show hoping to win the Waterloo Cup. Originally, men only took part, but now the five days of competition also incorporates ladies and juniors events.

Bowls, in one or other of its forms - crown green, flat/level green and indoor - is one of the UK's most popular participation sports. However, as far as spectator numbers are concerned and, particularly from the Waterloo Championships point of view, these are dwindling. The diehards are still there, about 1500 on the day I attended, and the bookies, but some way below the 3000 plus in the heydays of the Championships.

The fact that the venue is looking very tired doesn't help matters. The site is owned by a London investment company, and the local Waterloo Bowling Green Club rent the green and the spectator areas from them. The hotel itself is in desperate need of improvement and, like most bowls clubs around the country, the host club operates on a very limited budget. The green has covered spectator areas on three sides, but the seating is the old, bucket variety with no back supports. The club is on the lookout for surplus seating from any new stadium developments - so, if you have any, get in touch. 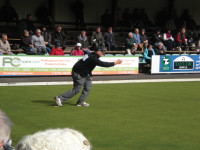 Keeping the club and the green viable is a full time job, and is the responsibility of Bowls Manager, Jim Parker. Since he took over in 2001, each year has been a struggle to keep the venue open, and none more so than this one. Because of the credit crunch, there has been a drop in sponsorship and a reduction in the number of entries for the Championships.

Jim, who also gets stuck into the green maintenance, and more so this year because of illness to his regular greenkeeper, Graham Hall, admitted to being very concerned about the future of the event. "It's been a difficult year, and we've had to look at ways of keeping costs down. We knew it was going to be tough; after the 2010 Finals we had to cut back on our end of season renovations because money was tight. Then we had problems because of Graham's illness, so we weren't able to do as much slitting as we would like. Also, the lack of rain at the beginning of this season gave us dry patch, which meant we had to use more wetting agent than we've ever had to. We've certainly been up against it."

Despite the difficulties, comments from the players about the green are positive and, even with the heavy footfall, the surface is looking sound and playing well. "We're very fortunate with this green," added Graham Hall, a greenkeeper for twenty plus years with five years at the Waterloo, "You have to bear in mind we have forty to fifty people a day on this surface over a four week period. And, it's not like flat green, up and down, they go in all directions, and in all weathers. If it's pouring with rain, they still play on it!"

"I'm very pleased with the way it's performed," continued Graham, "There are a couple of areas which probably need a bit of seeding, but that's it."

Surprisingly, the only feed applied to the green is Lawn Magic. "It's what we've used for about the last four years," added Jim. "It works well for us."

The maintenance routine in the build-up to the Championships includes a feed about ten days before the start and the normally fortnightly verticutting is increased to weekly, and that's about it.

As the recognised 'Wembley' of crown green bowls, one would expect state of the art drainage and irrigation systems and a selection of new machines. But that isn't the case. "We had quite a lot of drainage work done four years ago, but we probably still need a couple more drains put in," explained Jim. "The watering system was put in before I came here, and we add a new control mechanism five years ago. It works well, as long as you don't stick any spikes through it, which is what I did when I first came here!"

"As far as machinery is concerned, we rely mainly on our Dennis mower with the cassettes. We've also got a tungsten tipped verticutter, which was bought ten years ago, and it's a fantastic machine. It only just touches the surface, but it's amazing how much stuff we get off."

Once the Waterloo Championships are over, do Jim and Graham breathe a large sigh of relief? "No, we've still got a few more weeks to go," said Jim. "We've got the Champion of Champions event at the beginning of October, when all the season's major event winners - thirty-two of them - come here for the final tournament of the year. Then, of course, it's down to our autumn renovations. Apart from the vertidraining, which we get a contractor in to do, we do everything else ourselves - hollow coring, scarifying, topdressing and seeding. Ideally, we'd also like to be able to do the vertidraining, but it's having the equipment."

And what of the future? Contrary to my expectations, Jim was very upbeat. "There are a few new sponsors already in place for 2012, and I am rethinking the format which will have 128 players in the Finals week, all playing two games. It should increase the interest and excitement."

I hope it does because it would be a major blow to the sport to lose its iconic venue. At a time when local authorities are abandoning their maintenance of important community sports facilities such as bowling greens and, ironically, when the government is praising itself for its so called support of grassroots sport in the build-up to the London Olympics, the loss the Waterloo could prove fatal to an already ailing sport.