0 Waterloo One Year On 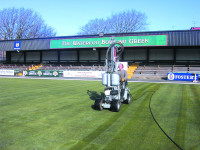 As Blackpool's 'Wembley' of Crown Green Bowls the Waterloo bowling green gears up for the Waterloo Championship, bowls manager and part owner Jim Parker is relying on one-metre deep compressed air de-compaction treatment to deal with any torrential rain fall during the matches.

"Last year we'd just taken over the club and we knew we had drainage problems," he remembers. "We brought in Terrain Aeration in March and they treated the whole green with their Airforce Scamper terralift machine, inserting compressed air one-metre below the surface to create fractures and fissures before injecting dried, milled seaweed, which swells when wet keeping the new air channels open. After the quarterfinals the rain came down in sheets and the whole green was flooded. A quarter of an hour later the water had drained and we were able to play the semi finals on time."

Since then, Jim has installed four new drains linking up to the main system. "Ideally we'd like four more so that they're running the full length of the green," he continues, "but at the moment it's not financially viable. Having said that, following the aeration treatment last year the green coped with one of the heaviest downpours on record, and I'm confident that it will deal with whatever the weather throws at it."

The Waterloo Championship starts in July with the finals (televised on Sky TV) in September. For further information contact www.waterloobowls.co.uk

Terrain Aeration can be reached on Tel: 01449 673783 Website: www.terrainaeration.co.uk