Satisfyingly, the green at Waterloo Bowling Club in Blackpool looks appreciably hungry, but with some mid-season aeration scheduled for the last day of June it is the ideal time to stimulate some much needed roots, particularly given that the toughest time of the year is ahead of us. 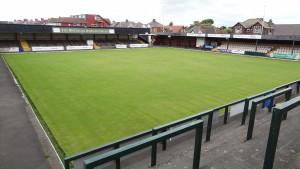 The Annual Meadow-grass, Poa annua, is still flowering but this is diminishing and although the going could be described as a little heavy, the surface is true and there is 100% coverage at a cutting height of 5mm. This extends to a single mower width around the outside of the green, where the height is held a little higher to try and reduce the impact of play on the ends and prevent wear creeping in from the edges.

The green had been scarified in two directions and although the impression is that the green is lean, there is plenty being boxed off and recovery is good.

The going is also a little heavy as there is a 10mm squidgy, thatch layer at the surface that both Mark Audin and Gordon Butcher, the greenkeepers, are working hard to eradicate. This has been made particularly difficult with the wet weather that we've experienced through June. Getting oxygen into the rootzone is key to helping degrade this thatch, but aerating isn't useful if the holes or slits you create keep filling with water.

The unseasonably high volumes of water have rinsed available nitrogen through the soil profile and Red Thread, a common fungal disease caused by the fungus Laetisaria fuciformis is prevalent, but hasn't been damaging, the variety and complexity of nitrogen forms, some supplied by the Turf Food organic fertiliser earlier this year has ensured that, when needed, the plant can respond to the potential threat of disease, even at a point in the year when it isn't anticipated. Levels of thatch at the surface are a concern that will need addressing as this is keeping the surface moist, this moist surface is favouring Toad Rush (Juncus bufonius). Aerating to reduce the thatch would ultimately be the preferred treatment, however the disparity in the height between the grass and the Toad Rush may start to affect the surface and a treatment of a herbicide containing a high proportion of MCPA will be applied before the end-of-season renovation.

The current focus is on the aeration which is due to take place next week. A SISIS Dart will be used in two different directions and depths but, prior to this, an application of a range of liquid fertiliser, containing a high proportion of potassium, and a biostimulant will be applied to promote root development.

Manganese is being applied through the growing season to help prevent Take-all patch in the late summer.