by Laurence Gale MSc
in Schools & Colleges, Rugby, and Cricket
on 21 Jun 2014

Laurence Gale MSc meets the Head Groundsman at Watford Grammar School, Mark Field, whose eight year tenure has resulted in improved playing surfaces and a better understanding of maintenance equipment requirements by the powers that be

Mark Field, Head Groundsman at Watford Grammar School, is a dab hand with a camera. It was his winning entry in the February Pitchcare Photo competition - his trusted Trimax shown close-up mowing - that prompted me to pay a visit to the Hertfordshire school to find out more.

The Watford Grammar School grew from the Watford Free School, a charity school for sixty pupils - forty boys and twenty girls - founded by Dame Elizabeth Fuller in 1704, on ground next to the parish churchyard in the centre of Watford. The schools became separate foundations for boys and girls in 1881, and the boys school moved to its present site in 1912.

As an outstanding school, Watford Grammar School for Boys became an Academy in 2010 and now has over 1200 students. It is set in twenty hectares, with the school playing fields split over two sites. Pupils are drawn from a wide catchment area and are able to enjoy participating in many activities, including sport and music.

Mark has been at the school eight years. He was born and raised on a large dairy farm in Australia where his interest in horticulture began.

He came to the UK in 1997 whilst on his travels and it was while 'working to pay his way' that he met his wife to be, Sara, and decided to settle down and live in Watford. He has always enjoyed gardening and looking after sports pitches, with cricket being his first love, and ran his own garden maintenance business until 2003.

His first job in the industry proper was as a groundsman with Watford Borough Council, working at Garston and helping to maintain cricket, bowls, rugby, football and athletics surfaces.

In the eight years he has been at the school, Mark has attained various qualifications, including PA1, 2 and 6, along with attending various industry courses. In time, and as his finances allow, he hopes to gain additional qualifications and study for a PhD in turf science.

Mark is passionate about groundsmanship and, during his tenure at Watford Grammar, has been able to improve the quality of the playing surfaces year on year, which has further encouraged the school to invest in new and second hand equipment.

Last year, he was able to purchase a Charterhouse Verti-Drain 7614 to enable him to aerate the pitches on a regular basis. In the past, he was only able to hire in a verti-drain twice a year, costing in excess of £2000 so, by investing in his own, Mark reckons it will have paid for itself within a few years.

"With so much activity on the playing fields, being able to decompact the surfaces helps encourage better root growth and maintain grass cover," says Mark. "It has been a godsend this winter, helping to keep the pitches playable through one of the wettest winters on record."

This year, the school has taken on William Barter as an apprentice to help Mark cope with the demands of the site. For the previous two years, he had been working on his own after his son, Callum, left to join the greenkeeping team at the nearby The Grove. "He is doing extremely well," says Mark proudly. "He started as an apprentice with me on a one year government paid scheme and was then recommended by his Oaklands College course tutor to their Course Manager, Phil Chiverton. 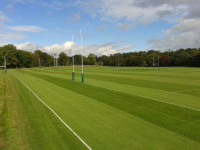 Over the years, Mark has built up a decent portfolio of machinery to help him cope with the workload. Recently, he managed to acquire a couple of new mowers - a Dennis FT510 and a Dennis FT610 - to help prepare the cricket squares. "But it's always a juggling act with the budget," stresses Mark, "as, last year, I had to do my own renovations to save money, especially as we had spent a lot of it on the new Verti-Drain!". When budgets do allow, Mark calls in local contractor, AT Bone, to assist him.

His cricket pitches are maintained using Surrey Loams Ltd Gostd 125 loam which, after such a wet winter, "has suddenly dried out very quickly" due to a dramatic improvement in the weather. "For the first twenty days of March it was constantly dry and warm, with temperatures well into double figures. This has meant that the cricket tables were showing signs of cracking and probably in need of some irrigation to aid preparations for the first pitches to played on in April, when the school starts its cricket season."

When working on his own, Mark would often find himself working between sixty and seventy hours a week to cope with the workload, especially during term change overs and at the height of the grass cutting season. He regularly starts work at 5.00am to ensure he can get most of the mowing done before the children arrive for school. However, he is hoping that these early starts may be a thing of the past now he has got an apprentice to help him.

The majority of the site is cut using a Trimax Procut S3 rotary mower; remaining areas are cut with an array of pedestrian mowers and strimmers to suit requirements.

Mowing is generally carried out once a week. However, there are times when Mark will mow some areas twice a week to keep on top of grass growth. Rugby pitches are kept at a height of 50mm, whilst cricket outfields and the athletic tracks are maintained between 30-35mm.

Fertilising is kept to a minimum, usually a couple of feeds in spring and summer, followed by an autumn feed to help the pitches through the winter months.

Linemarking is carried out with a spray jet linemarker, using string lines to maintain straight lines. These are generally overmarked weekly, with the most time consuming job being the setting and initial marking out the eight lane 400 metre running track.

The cricket squares are maintained at a height of 15mm, with a seven day preparation regime. This involves reducing the cut gradually to a playing height of 3-4mm. In that time, Mark will scarify, clean out, mow and mark out the pitches for play. With a heavy fixture list, he always tries to get as many matches as he can from each prepared strip.

The school has several artificial cricket practice nets which help reduce the wear on the pitches. These are kept clean and brushed on a weekly basis.

Mark is also a keen gardener and has been instrumental in designing and planting up many new landscape schemes to enhance the school grounds. He recently put in a new perimeter hedge around the sportsfield, planting over 4,000 mixed hedging plants, which has helped demark the boundary and stopped a lot of unwanted foot traffic onto the pitches.

Like many groundsmen, one of the hardest things is to convince the powers that be to invest more money and resources into their facilities. Too many people just take the grounds for granted and think they only need grass cutting.

Mark is confident he can improve the quality of the playing facilities even further now he has an extra pair of hands. He's hoping the school will recognise this and support both of them with the relevant materials and equipment to make their job more efficient.