0 Watt Fences - Sole agent in the UK for Fornells 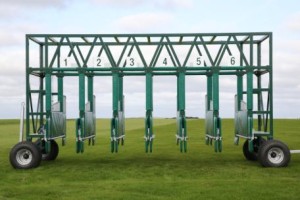 The starting stalls have been manufactured in France by Fornells, of which Watt Fences are their UK sole agent, and are used at many French racecourses. The manufacturing process took several months and the stalls arrived in Ireland at the beginning of September where they were assembled by Fornells and HRI Technicians. Fornells were selected as the preferred manufacturer for the next four years following a competitive tender process and an evaluation of the various international options available.

Several benefits of the new starting stalls include: 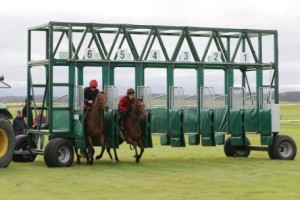 "I am delighted that the new Fornells starting stalls will be used for the first time at the Curragh this Sunday. They have undergone extensive testing and have been well received by the jockeys and trainers who have viewed them in operation. The existing Curragh stalls, which are still in good condition, will be deployed at other Irish racecourses to replace our oldest Metropolitan sets. HRI's intention is that all our older sets of starting stalls should be replaced on a phased basis over the next four years, and this is an important first step in the modernisation process."

With years of experience, Fornells have been supplying racecourses with their starting stalls for many years and have developed a wide range of options to meet the special requirements of their users. Watt Fences are Fornells sole UK agent and distributor so if you would like any further information regarding any of Fornells products please contact Watt Fences.