When I first started at Shrewsbury and Atcham Borough Council some 7 years ago, I was told in my interview that the County Ground had sometimes been known to flood but nothing too serious! 7 years later and 17 floods later I'm still here to tell the tale. The facility is predominantly a cricket ground. We have 2 cricket squares and outfields for the summer, then it changes to mini-soccer and junior football for the winter.

In the cricket season we have 10 teams that play here plus many one off games which means we have over 100 games per season, this adds up to an average of 7-8 games per week. This is a lot of league cricket on two squares trying to provide a very high standard, as required for each night of play. On top of the cricket we also have a bowling green and two grass tennis courts to maintain and these are maintained at the same high standard as the cricket squares.

When I first arrived on the council I said that my main objective was to provide the best local authority pitches in the county, a tall order. Many games later and thousands of customers later, we have, with all the restraints that come with working within a local authority, achieved these goals, proving that local authority grounds can be maintained as good as anybody else at any level. 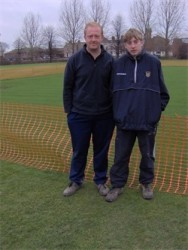 For me this was achieved last year by winning the Pitchcare/Cricket World, Local Authority 'Cricket Groundsman of the Year' award. A great honour to receive, for just doing your job. It proves it really can be done, at every level, especially at local authority level.

I am very pleased with the support I get from my line managers here at Shrewsbury and Atcham. By working together we can continue to raise the standards at all the councils facilities. This support has resulted in an opportunity for me to take on Matthew Boyle who for the last eight months has worked along side me to learn about Groundsmanship.

Matthew is employed by Walford College ,Baschurch. On an e2e course (entry 2 employment) he attends college doing NVQ1 once a week and the other four days, works at the county ground with me. He is 17 years old and very keen to learn from his experiences. I believe it is very important to pass on our skills and knowledge to the next generation of potential future Groundsmen/Greenkeepers.

I am sure the future of our industry will be bright if other Councils show the same commitment as Shrewsbury and Atcham Council and continue to support and invest in bringing youngsters into our interesting and challenging industry.