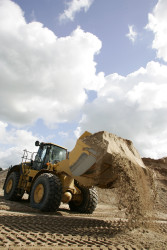 Top dressing and rootzone supplier, WBB Minerals, has succeeded in gaining another three years of accreditation under the Energy Efficiency Accreditation Scheme, the UK's only independent award recognising achievements in reducing energy use by leading organisations in industry, commerce and the public sector.

In 2003 WBB Minerals (who's brands include Rufford and Pro-Sport) became the first company in the quarrying sector to gain accreditation under the Scheme which is managed by the Carbon Trust, a government-funded independent organisation which helps businesses cut carbon emissions. Since then WBB Minerals has succeeded in cutting carbon emissions by more than 7,500 tonnes across its UK operations, thereby significantly reducing the company's environmental footprint and creating a more competitive business.

In awarding the re-accreditation, a panel of assessors for the Scheme noted WBB's ongoing achievements in raising energy awareness throughout the business and in developing innovative energy efficient solutions.

"We're delighted with the re-accreditation which is just reward for the ongoing efforts of so many people in driving down WBB's energy consumption," commented Phil Goodwin, WBB Minerals' Energy Team Leader. "The accreditation clearly signals our achievements to date and we are determined to build upon this success."

The Accreditation means that WBB Minerals remains amongst an elite network of 200 UK organisations recognised for their active reduction of carbon emissions. The company will receive its award at an official presentation ceremony in Birmingham next month.

WBB Minerals operates under a number of brands in the sports & leisure industry, including Rufford and Pro-Sport

The Energy Efficiency Accreditation Scheme is the UK's only independent award recognising achievements in reducing energy use by leading organisations in industry, commerce and the public sector.

In December 2004, the Scheme became part of the Carbon Trust's portfolio of offerings to UK business and the public sector. The Carbon Trust now has overall responsibility for the scheme.

Accreditation is awarded by the Energy Institute, the leading professional body for the energy industries and the Scheme is managed by the National Energy Foundation on behalf of the Carbon Trust.

The WBB Minerals Group is one of the world's biggest providers of industrial minerals with operations in eight countries across Europe and over 6,000 customers worldwide. The company's products stem from its reserves of silica sand and clay and are predominantly utilised in the glass, ceramics, foundry, construction and sports & leisure industries. WBB Minerals has sites throughout the UK and employs over 600 people.