0 We've run out the travellers! 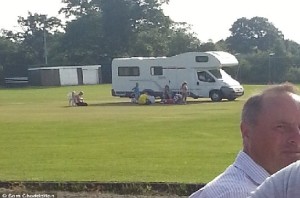 When a group of travellers chose their latest settlement, it seems they underestimated the quality of the opposition.

They found themselves pitched against the hardy regulars of Hoghton Cricket Club, and from that point there was only going to be one winner.

Invoking 'the spirit of the Ashes', as the village cricketers themselves put it, and with a little help from Twitter, they defended their turf throughout the night with a human barricade.

Battle: Members of Hoghton Cricket Club formed a human barricade around their pitch to stop more travellers setting up camp

Stand off: Police talk to players and supporters from Hoghton Cricket Club who refused to let more travellers invade their pitch

The rearguard action began after caravans and a motorhome entered the ground, near Preston, on Monday morning, and locals reported dozens more people asking for directions to the pitch.

Cricket club chairman Neil Eccles, 50, one of the first on the scene, said: 'This just isn't the place for an invasion of travellers. It is a nice rural village and there were lots of people walking past who were horrified by what they saw.

'We put the word out, used Twitter to rally the local community and managed to barricade the entrance to stop any more caravans getting on and ruining our ground.'

See the rest of the article on the following link :- http://www.dailymail.co.uk/news/article-2365491/Lancashire-cricket-team-barricade-field-travellers-mobile-home-parks-pitch.html#ixzz2ZHmmy4RI