by Charmian Robinson
in Industry News
on 08 Jul 2008 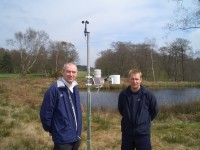 Phil Stain, Course Manager of Notts (Hollinwell) Golf Club, was delighted to receive a Scotts iTurf weather station recently as part of the prize for being overall winner of the 2007 BIGGA Golf Environment competition. It was presented by Dave Steward, Marketing Manager of awards sponsor Scotts.

Notts (Hollinwell) Golf Club has been the Midlands Regional Winner in the BIGGA Golf Environment Competition for several years and in 2007, through their continued efforts with existing initiatives and the implementation of many new ones, became a worthy winner of the overall prize.

Judges Kelly Watson and Richard Stuttard, Ecologists at the STRI Ecology and Environment Unit, had this to say about their achievement: "Notts (Hollinwell) is a heathland course that not only impresses through large-scale environmental and ecological projects, but also by with their superb attention to detail and their huge list of smaller initiatives. The course is managed by a team of nine greens staff under the guidance of Philip Stain, and the commitment and enthusiasm of all involved at the club towards promoting aesthetically and ecologically interesting holes, whilst maintaining fine playing surfaces, is clear when visiting the course and also when talking to Philip and his team. It is the enthusiasm and the backing from all levels at the Club that has enabled them to claim this year's top prize."

Phil is already seeing the benefits of owning the iTurf weather station: "It is quite incredible how much information it produces. Our initial reaction was one of fear of being overwhelmed by the sheer volume of material, but it soon became clear that once you adjusted to focusing in on specific areas, the information was clear and very easy to interpret and could then be used to influence actual operational decisions. For example, the station monitors the soil moisture levels in the root zone, giving us an accurate indicator for appropriate watering. It also measures wind speeds which affect the spread of watering. As we use a sprinkler system at night, we identified that wind speeds consistently drop to negligible levels between the hours of 2 and 3am so we adjusted the watering times accordingly. We noticed this spring that the greens were particularly slow growing. The weather station measures soil temperatures and we were able to present figures to the greens committee to show that slow growth was due to the soil temperature being constantly below the 8 - 10 degrees required to stimulate growth."

"I've only mentioned a few examples, but the longer we use the weather station, the more the benefits become apparent. In fact I wouldn't want to be without it now and it's very smart looking unit to have on the golf course!"

Any golf club wishing to enter the 2008 BIGGA Golf Environment Competition can still do so by requesting an application form from BIGGA's Learning & Development Department or you can download the forms from the BIGGA website: www.bigga.org.uk
For more information, call 0871 220 5353, email prof.sales@scotts.com or visit
www.scottsprofessional.co.uk