by Gerard Griffith
in Consultancy
on 26 Aug 2010

What is it about the British and the weather? We are obsessed with it. It is the start of almost every conversation. However, monitoring the weather is a very useful and practical exercise as part of your turf maintenance operation

Gardeners, growers, foresters, farmers, golf course managers, commercial landscapers, and many more depend on weather information for their work. This information enables, for example, the grower or turf manager to plant, irrigate, and control pests with a high degree of efficiency. It enables the forester to monitor wind conditions and forest dryness. It can also provide an indication of environmental stress on workers and livestock.

An effective way of monitoring the weather is by using a weather station. Having them on golf courses and sportsgrounds will prove an invaluable tool, for not a lot of money. A good weather station should consist of an anemometer (measures wind speed and wind direction); a self-emptying rain gauge; temperature, humidity and barometric pressure sensors. Most weather stations also measure indoor temperature and humidity. Some even include solar radiation; UV; water proof probes; additional temperature and humidity sensors; leaf wetness, soil moisture, and lightning detectors. Before the digital age, the traditional way of recording different aspects of the weather was by using a Stevenson screen. It was invented by the father of author Robert Louis Stevenson. It is an old term for a pleated wood enclosure that held weather instruments. The enclosure was painted white to reduce the effects of heating by solar radiation (which would affect the weather measurements) and the pleats allowed wind to flow through the enclosure to maintain close to ambient conditions.

Even though computerisation is available for recording weather information, the Stevenson screen is still used to record weather data along with other manual instruments such as thermometers, rain gauges, barometers and anemometers.

If you have decided to install a weather station you need to ask yourself "what do I need to record?" Below, are some of the basic items that are useful to record. You can expand this further if necessary.

Thermometers measure air temperature. More specifically, this device measures the air's heat content. The idea of "mercury rises" actually refers to traditional thermometers, which use liquid to generate readings. Heat causes the liquid within the thermometer to expand and travel up and down the tube. Temperatures are measured in degrees Celsius or degrees Fahrenheit, depending on location.

The dry bulb thermometer is exposed 'as it stands' and indicates the temperature of the air at the time of observation.

The wet bulb thermometer indicates the 'temperature of evaporation' which is, in normal circumstances, lower than the air temperature.

The difference between the dry bulb and the wet bulb readings is known as the 'wet bulb depression'. From the dry and wet bulb readings, relative humidity and vapour pressure can be obtained. Purified water should be used for maintaining a wet bulb. Tap water must not be used. The wet bulb muslin should be changed every two weeks or more often if it is dirty. The water container should be replenished often and never be allowed to dry out. If the wet bulb is above 0°C and is higher than the dry bulb temperature, either the muslin is dirty, and should be changed immediately, or one or other of the thermometers is defective.

The minimum thermometer is a spirit glass type with a small dumb-bell shaped index of dark glass in the bore. This index is prevented from breaking through the meniscus of the spirit column by surface tension. As the temperature falls, the index is drawn towards the bulb, but remains stationary as the temperature rises. The end of the index furthest from the bulb therefore indicates the minimum temperature reached since the last setting. The thermometer is installed in the screen the same way as the maximum thermometer. After the thermometer is reset, the reading should be similar to that of the dry bulb thermometer.
Recording the readings from the above four thermometers should be done carefully, but quickly, each day so that the screen door is open for the shortest possible time and changes in temperature are kept to a minimum.

during the night over short grass freely exposed to the sky. The most open position available should be selected and the grass should ideally be kept short so that its condition resembles that of a lawn.

Soil temperature is the temperature of the soil measured at a given depth, typically 50, 100, 150, or 200mm, and sometimes as much as 500 to 1000mm. Soil temperature impacts many natural processes, such as seed germination, plant growth, and soil respiration. Soil and air temperature generally do not correlate. Soil thermometers should be located together at the rooting depth of the turf, taking also into consideration soil depth and texture.

Soil thermometers between 50mm and 200mm deep are unmounted and unsheathed, with a bend in the stem between the bulb and the lowest graduation. The bend allows the bulb to be at 50mm, 100mm, or 200mm when the vertical part of the stem is sunk into the ground. Measurements at these depths are made under a bare soil surface. The thermometers are read without being disturbed from their position in the soil.

Soil thermometers used for recording temperatures above 300mm (300mm to 1200mm) are enclosed in glass tubes and their bulbs are embedded in wax to make them insensitive to sudden changes in temperature. This allows them to be drawn to the surface and read before their temperature has had time to change appreciably. The soil thermometers are suspended in steel tubes sunk through the surface of the grass plot. Water must not be allowed to collect in the steel tubes. To prevent this, the tubes are fitted with caps. The thermometer is suspended from the cap. Leaking tubes or faulty caps should be replaced.

Early modern rain gauges were called pluviometers, which comes from the Latin pluvia, meaning rain. At around 1660, the great British architect and designer, Sir Christopher Wren, devised an instrument to measure small amounts of rainwater by using standard weights to determine how much rain was 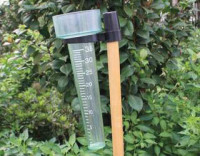 collected. However, Reverend Horsley was credited as being the inventor of the modern rain gauge in 1722, which also set the standard for rain gauges used today.

Knowing the strength at which the wind is blowing is important to all turf managers. It determines whether or not it is possible to apply fertiliser, spray against disease or to topdress. 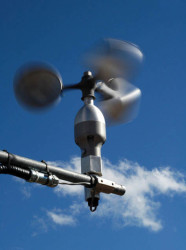 Wind velocity, or speed, is measured by a cup anemometer, an instrument with three or four small hollow metal hemispheres set so that they catch the wind and revolve about a vertical rod. An electrical device records the revolutions of the cups and calculates the wind velocity. The word anemometer comes from the Greek word for wind, "anemos."

In 1450, the Italian art architect Leon Battista Alberti invented the first mechanical anemometer. This instrument consisted of a disk placed perpendicular to the wind. It would rotate by the force of the wind, and by the angle of inclination of the disk the wind force momentary showed itself.

The same type of anemometer was later re-invented by Englishman Robert Hooke who is often mistakenly considered the inventor of the first anemometer. The Mayans were also building wind towers (anemometers) at the same time as Hooke. Another reference credits Wolfius as re-inventing the anemometer in 1709.

This refers to the amount of water evaporating from the soil and bodies of water in a given area combined with the water that transpires metabolically from nearby plant leaves. Abbreviated as ET, evapotranspiration is an indicator of how much water a plant requires over a given period of time (day, week, month, year). Measured in the same units as rainfall (millimeters or inches), it is in effect the opposite variable. Evapotranspiration is an important measurement that turf managers use to determine when to irrigate their turf.

Agricultural weather stations used to calculate evapotranspiration will need to be fitted with weather sensors for solar radiation, air temperature (maximum and minimum), relative humidity, and wind speed. The unit must be placed 6.5 feet (2 metres) above ground.

Leaf Wetness - or surface wetness - is the amount of liquid moisture on the surface of plant leaves or other exposed parts of a plant. It is of interest because of the influence leaf wetness has on plant diseases, since many can only infect plants with wet leaves.

Leaf wetness sensor placement is dependant on the crop and disease. For a consistent response, it is suggested that the leaf wetness sensor be mounted on the side of a horizontal post within the planted area, at the level of the crop leaf height, and pointed towards the north. The sensor should be cleaned on a regular basis to remove accumulated dirt and debris, which will affect its accuracy. Use a clean soft bristled toothbrush with water and a mild detergent liquid to scrub the surface of the sensor, making sure to rinse thoroughly. The type of sunshine recorder used by the Met office utilises the heat from the suns rays, focused by a solid glass sphere to an intense spot, to chart a trace on a specially manufactured card. There are three types of card used, depending on the time of year:

A new card is inserted into the recorder bowl each day, even when there has been no sunshine during the past 24 hours. Ideally, the card is changed between sunrise and sunset.

Now that you are ready for monitoring the weather, it is important to locate your weather station in the correct place. Firstly you should have it close to your office which saves a lot of time as you can quickly walk out and gather the information and enter it into your data. Avoid large buildings or obstructions which could create shade or wind shielding, which will lead to false readings. For example, a thermometer that is exposed to the sun will raise the temperature of the thermometer, and thus the temperature that it indicates will be higher than the actual temperature of the air. 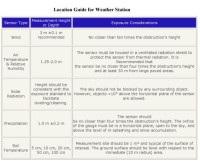 Wind, air temperature and water vapour pressure measurements are affected by surface type and roughness, soil moisture, regional topography, and obstructions. Sites selected for their applicability to a broader area should be free from obstructions such as buildings, trees, and steep slopes. Ten metre towers are often used to raise measurement heights above low-lying obstructions. The following table lists the suggested measurement heights and exposure (distance to an obstruction) for each type of sensor.

When you start recording the weather, you must try and collect the data every day. Include it as part of your daily routine. Morning time, around 9.00, is ideal and it only takes a few minutes. You should then log the information into a chart or computer document. You will find that over a period of time you can see a trend developing that is relevant to your area. Keeping a weather record is very useful as it can give you much information on the climate of your area which, in turn, will be of immense benefit and relevance to your work, such as when it is best to apply summer fertiliser, overseeding, shutting down your irrigation system - and you will have a clearer indication of when the first frosts are likely to arrive.

Pitchcare would like to acknowledge the help of Gerard Griffith of Met Éireann for providing the information for the above article, which was written by Alan Mahon, Editor of the Greenside magazine.