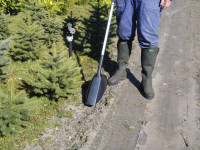 First we applied herbicides in water, using knapsack and conventional hydraulic sprayers at water volumes of generally 200-500 litres per hectare, which is a very considerable amount of hard work just lifting and carrying 25kg of water and sprayer around.

Then we moved on to CDA sprayers, where volumes of liquid applied are reduced to a more manageable 10-15 litres per hectare, making far more efficient use of labour, but at a considerably increased cost in CDA materials.

The latest innovation is ULV (Ultra Low Volume) technology, that is designed to apply herbicide neat at just 1-3 litres per hectare, with no water involved at all.

Just imagine being able to fill a 500ml container with neat herbicide and then being able to work continually for up to two hours, never having to return to a base vehicle to refill, nor having that heavy burden of water to carry around! Just a 3kg spray lance supported from an elastic shoulder strap. Imagine the labour hours saved each day not having to continually return to a base to re-fill and mix, not to mention the reduced stress and tiredness of an operator working all day. Improved labour productivity is, without doubt, the single most important reason this system scores, as it can recover the whole outlay of a ULV sprayer within just a few weeks in labour savings alone.

Several factors are now driving this move. Economic forces and the dire need to save labour and chemical costs, environmental protection requirements coming from new EU legislation in the form of its Sustainable Use of Pesticides Directive and Water Framework Directive and, finally, the greatly reduced number of pesticides 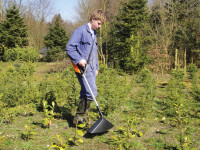 available, of which by far the most important is glyphosate, probably representing at least 80% of all use on landscape and highways weed control.

The EU's Sustainable Use of Pesticides Directive requires national plans to reduce pesticide use in general, and especially in public spaces. It is being phased in over the next two years starting November 2011. Pesticide users are required to consider alternatives to spraying, such as sweeping, mulching or hand weeding, to cut down on the amount of pesticide applied and to use targeted spot spraying rather than blanket spraying.

The introduction of this new generation equipment, Mankar ULV, will revolutionise the weed control industry in the UK. 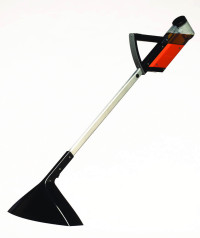 The key to achieving this breakthrough was the work done to persuade our own Chemical Regulation Directorate (CRD) to allow the neat use of glyphosate (currently only Roundup ProBiactive 450). Other products are in the pipeline.

All other product labels currently require pesticides to be applied in minimum volumes of water or CDA carrier.

The issues that were of concern to the CRD were efficacy, spray drift and potential operator exposure. The Mankar ULV application technology has been well designed to address these problems, which is why it is the leader in this field across Europe and, indeed, worldwide. Its patented technology controls droplet size to eliminate the tiny droplets always present in pressurised hydraulic sprayers but, unlike CDA, it directs the spray vertically downwards at high speed towards the target weeds or ground in a fan shaped pattern. All this also takes place under a spray shield, with the result that there is no problem with either spray drift or operator exposure. In fact, this shielded, low drift system also improves the window of work during marginal spraying conditions, when an operator using a CDA sprayer or a conventional hydraulic sprayer would have had to stop work, further improving labour productivity. By working close to the ground and under a spray hood, there is far less ability for wind to cause drift.

Another big plus comes out of this application system, as it allows huge reductions in the amount of active herbicide applied per hectare of at least 50%, with no loss of efficacy. With the new EU directives imposing Thematic Strategy requirements to reduce pesticide use, especially in public areas, this ticks all the boxes.

The reason why the system is so effective is that it applies something like 100 times as many droplets as CDA on a given area. This achieves better coverage of even the smallest target weeds, like newly germinating Annual Meadow Grass.

In neat form, the herbicide sticks to target foliage and spreads with no dilution or bounce off, as occurs with water based applications, so more of it is absorbed into the target weed.

In Holland, glyphosate rates allowed in public spaces are now reduced to only one litre per hectare by law, and this technology is the only one available that will apply such a small dose and yet effectively kill the weeds. It is also the only system allowed near water courses, bearing out its no-drift credentials. Little wonder then that the word is spreading, with many more users taking advantage of the savings to the environment and their pockets.

Whilst the hand held lances are very popular as an alternative to other hand held equipment, the Mankar ULV system works equally well when fitted to a variety of other equipment such as pedestrian wheeled sprayers, tractors, ATVs, utility vehicles, etc. It has even been further refined to use a weed sensor system that, literally, automates a spraying machine to only spot spray where green foliage is identified by its sensors. This can result in an effective application of glyphosate at well under one litre per hectare, which no other application system can even come close to emulating.

In doing so, the system meets and exceeds virtually any restrictions in use of pesticides likely to be imposed under the new legislative regime and, at the same time, makes huge savings in labour and pesticide costs.