by Peter Edmondson
in Industry News
on 06 Nov 2010

And woe betide them if they don't mop out the changing rooms - they have been dragged out of the pub in the past! 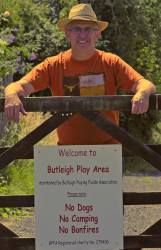 Tucked away behind high, hawthorn hedgerows there are occasions when an unsuspecting visitor might miss the playing field in the quiet, rural, Somerset village of Butleigh. Unsurprising, given that the village itself is somewhat off the beaten track, sitting in the middle of a triangle of small market towns - Glastonbury, Street and Somerton are all within 4/5 miles.

Butleigh is currently home to approximately 1000 people, living in 300 or so dwellings, a small primary school (typically 100 pupils), a pub and a village post office stores.

The village also boasts a proud sporting tradition, with some magnificent assets. Just on the outskirts of the village lies historic Butleigh Court, a period house now converted into four apartments, in front of which Butleigh Cricket Club (two Saturday league teams, Sunday friendly and three youth teams) have proudly played for nearly fifty years. The village rugby club have their home in nearby Kingweston and, behind the aforementioned hedgerows, lies the village playing field, the home of Butleigh Dynamos FC, and an important base for other local football clubs at junior and youth level.

Owned by the Parish Council, and leased on a peppercorn rent to the Butleigh Playing Fields Association, the compact Back Town site boasts two acres of grass pitch area and an area of hard standing, suitable for ball-games and skating, but most commonly used by youngsters learning to cycle in safety.

The facilities on-site reflect the committees desire to work with the existing village sporting bodies to provide a suitable, pertinent and, hopefully, sustainable facility.

The last ten years has seen a determined drive to engage all of the local sporting clubs to consider using the playing field for either practice, games or coaching, with the result that we are now home to a Kwik-Cricket club which offers an introduction to cricket that will lead those who wish to into the local competitive cricket scene. A further link with the primary school sees us coaching football in the winter months, and probably our biggest success is the weekly Tag rugby sessions, currently attracting forty plus visitors on a Wednesday evening. 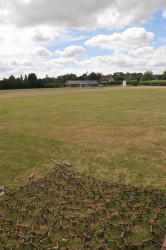 Facilities at the site include a full sized football pitch (which is currently used by the Dynamos and two youth teams from nearby Street FC) and an area which can easily accommodate a 60 x 40 yard mini soccer pitch alongside. In between these, we have an artificial cricket wicket with mobile-net cage. Wheel away the cage and you get an acceptable cricket facility for youth games, although one particularly wet summer saw us hosting a Butleigh CC game against a touring team from Harborne CC on a pitch with 45 yard boundaries!

As with all of our facilities the cricket net is available free of charge throughout the summer, and we also try and maintain access to mini-soccer goals. One recent addition which is proving popular is a concrete table-tennis table, which was installed this Easter at a cost, including solid base, of £2000.

In 2006, we were grateful recipients of a Football Foundation grant which enabled us to build a circa £320,000 marvellous new pavilion, comprising function-room and kitchen for sixty visitors, ample toilet facilities and changing rooms for home and away teams and officials.

In addition to this site, the Butleigh Playing Fields Association volunteers also look after a children's play park at the other end of the village where, once again, mini soccer goals are sited on a level and well maintained area of amenity grassland. This play park was the subject of a recent £14,000 upgrade, money which helped clear some out of use areas, install pathways and generally tidy it up.

Fortunately, for the voluntary groundstaff, the work has made maintenance a lot easier due to improved access, wider pathways etc. With its blossoming trees and sympathetic landscaping the Holm Oaks Play Park is a safe, peaceful and tranquil area for families to enjoy the children's playground equipment.

All of which would be more than satisfactory to the people who originally established the Playing Field Association, and would exceed their expectations of what could be achievable in a small village.

However, the passing of time has brought greater pressure to bear on the facilities of voluntary associations such as ourselves, as the amount of traditional council-owned, available for hire pitches has declined - so much so that, in their entire area, our local authority, Mendip District Council, currently have only one football pitch available for hire and one further training pitch, which is covered by covenant preventing organised matches from taking part!

The installation of a 3G artificial surface at nearby Strode College, available to hire by the hour, has been a godsend. Other than that, most football, rugby and all cricket facilities are either run by clubs or parishes and, therefore, are reliant upon the diligent stewardship of volunteers.

The quality of such pitches is then heavily dependant upon the aspirations and resources of the volunteers at these places. The typical facility is likely to be a donated field from a benevolent land-owner who wanted to help the community have somewhere to play or, like Butleigh, as a result of planning gain, a landowner has been required to make available a field for recreational purposes in order to be granted planning permission for housing on another site.

The likeliest scenario is that you will be playing on converted pastureland, but not necessarily the best of that.

Another possibility is the land is purchased for you by a developer who, perhaps, buys your existing ground for housing/retail development and then purchases, for you, an area of land on the edge of town in order to redevelop it as sports fields.

Care needs to be taken before accepting what is offered, as the land may not be that desirable - in Somerset there is a lot of low-lying land.

Unfortunately, the fact that generations of farming families have been unable to drain it satisfactorily seems to get overlooked, and there are sports clubs around who must be wishing that they had had more control, before accepting what was offered to them.

During the recent extreme winter, one local senior football team had to temporarily relocate to Somerton Playing Field, at a distance from their base, due to no other pitches being available locally and their own facility suffering from a severe drainage problem.

Many playing field associations are able to serve the needs of their own parishioners and, thereby, satisfy the terms of their own constitution. One or two problems are starting to stack up for those like us at Butleigh who offer their facilities to the wider footballing community.

As with everybody else, our greatest challenges are matters concerning budgets and availability of access. Put simply, if you are spending approximately £2,500 per annum of fund-raised money on trying to maintain your football pitch, is it prudent to then, at certain times of the year, have the goalmouths roped off, thereby denying access to the local after-school children who just want to have a kick-around? It is, after all, 'their' pitch and likely that their families are the more significant source of funding than the weekend teams for whom it is being so carefully maintained.

This problem continues out of season as well. This spring's renovation saw whole areas effectively out of commission as we attempted to restore the condition of the pitch after the dreadful winter, which even the South-West of England had to endure.

Our pitch, which is regularly verti-drained and sanded, and therefore considered to be a 'good-drainer', was permanently wet, frozen or covered in snow. Between goalmouths it was hard to find the grass at the end of the season, which, this year, saw us host 48 football matches, down from 2008-09's highpoint of 64 games. 40-45 games per season is probably about the right amount given the restoration budget is established at £2500.

Pitch hire fees are another contentious issue. There are, apparently, facilities where you can be charged anything up to £70 per game. We charge adults £30, a figure that is slightly lower than the average in the area. For that, the teams will find they have nothing to do except wash out the changing-rooms, put the corner-flags away and lock up. And woe betide them if they don't mop out the changing-rooms - they have been dragged out of the pub in the past!

Our maintenance schedule is fairly straightforward. We mow weekly, using either a Kubota BX 2300 or, as often as possible for Dynamos games, the old Dennis Premier 36" will make an appearance. We chain-harrow monthly, if possible, and we have an ancient Sisis spiker which gets used when conditions allow.

Another useful piece of kit is a 36" sarell spiker/roller. Lines are marked using a spray line marker, incidentally the same one that the Pitchcare community encouraged me to buy all those years ago when I first joined to get a few hints on groundsmanship! Thanks.

Annual maintenance goes out to local contractors. We try to have it verti-drained three times every two seasons. Although this isn't enough, it's what we can afford. We also have between 50 and 80 tonnes of sand topdressing added most years. This year, we have experimented with rubber-crumb in the high wear areas between goalmouths. We will be watching carefully and monitoring the outcome.

Probably the most visually useful maintenance procedure that we carry out is weed killing - we use a local specialist for this, as we do for hedge trimming. 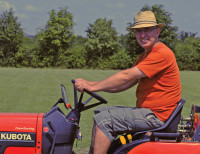 The committee are grateful to The Football Foundation for their help in funding the pavilion and are aware of out commitments back to the footballing community. It has to be said, though, that a lot is being asked of voluntary organisations and, given that the sports mad British public seem to think we should be participating and succeeding in, or hosting, every world event, an extraordinary amount of the workload, which would lead us to that, is being left in the hands of an unskilled, underfunded volunteer workforce.

All governing bodies now talk about the benefits to the community of people being involved in leisure pursuits and recreational games. Wouldn't it help the voluntary sector provide these facilities if, say, the local authority or the County FA could use their purchasing-power and help affiliated organisations secure much lower prices on their consumables or contractor services. That would be very easy to establish and maintain, and would show an almost instant return for those who were able to affiliate.