Ashville College is an independent college based in Harrogate North Yorkshire. It was founded as a Methodist boarding school for boys in 1877, and subsequently merged with Elmfield College and New College in the 1930s. It now thrives as the oldest private school in Harrogate, although it is classed as a Public School, being set up when most education was organised privately, in the home, rather than being available to anyone who could afford the fees. It is now open to non-Methodists and to those of non-Christian religions.

At various times of the year the pitches are also used for lacrosse, rounders and volleyball.

In addition to the outdoor facilities, the college has two sports centres and a swimming pool.

The team consists of myself, my deputy, Graham Oxley, and three groundsmen, Karl Spink, Dave Allan and Brian Llewellyn

We work to a tight schedule as we are continually preparing for sports fixtures, sports lettings and other bookings. Working around these events means that the basics, like fertiliser applications, overseeding, end of season cricket renovations and vertidraining, have to be carefully planned.

The Harrogate soil is yellow clay, which is good for building on, but not much else! So, we have to have a very good vertidrain schedule in place. Basically, if the tractor can travel, its out 'vertidraining' with our new Wiedenmann Terra Spike.

At the time of writing (early November), we had carried out three passes across all the playing areas, starting at a depth of 6" with 5% heave. We do the first pass after a hectic spring and summer sports programme on all the fields, starting with the cricket outfields and then moving onto the rugby pitches. Then we change over to 10" solid tines and work at full depth with 15% heave. We continue this all the way into December.

We usually start the cricket renovation work on the squares in the last week of August. We are very fortunate that the final college fixture is in the first week of July prior to the end of term. Then we just have evening league fixtures and any outside booking fixtures to oversee. This gives us a

chance to get the wicket ends renovated, and gives us plenty of opportunity to get the squares watered using the newly installed irrigation system, which has certainly saved us time and money. During the season, the outfields are cut twice a week, and we let the clippings fly to add nutrients. They are then cut once a week after September, but this depends on the weather and ground conditions.

Long term, we are looking into getting the first team square fraise mown and the outfield scarified and overseeded with a dwarf rye grass seed.
We use Scotts 14:5:10 spring/summer fertiliser and Scotts 6:0:27 for our autumn feed.

We also use Boughton County Loam and Johnsons grass seed, which has cultivars of Jessica, Evita and Sauvignon.

On the rugby pitches we overseed with Johnsons J Premier pitch + Gromax plus. This gives us excellent grass coverage. We get outstanding results from applying Scotts Sierrablen 28:5:5. Rugby pitch preparation work begins in July when we start to top the pitches to 3", and that's when we erect the Harrods rugby posts.

We contract out the broadleaf weed control spraying and fertiliser applications, which are undertaken by Alan Chappelow Sports Ground Contractors, in conjunction with Simon Hardcastle of Scotts.

The team has recently been retrained on the Cricket Foundation 1 and 2 courses. This has given us an insight into new techniques, and it was also useful to get 'refreshed' in the basics. We intend to do similar with the basic winter pitch and linemarking courses.

Our six tennis courts and five netball courts have recently been resurfaced. They are surrounded by trees so the maintenance of these is done weekly, when we brush the leaves and other debris off the areas. Then we spray for moss and algae build up during the October half term, and when required as fixtures allow.

The previously mentioned Wiedenmann Terra Spike was purchased in 2009 to complement the Kubota 9540 loader tractor, which is now the workhorse of the department. We were unsure of which machine would be best suited to break up the clay structure but, after seeing demonstrations of

the Wiedenmann, in conjunction with the Kubota 9540, we were more than convinced that we would break up the clay compaction. We purchased the machinery from K&M Mowers.

Pitches are overmarked weekly, usually on a Friday, for the weekend rugby fixtures. For the athletics track, summer field events and rounders, we overmark on a Monday or, if we have an athletics meeting, we do it on the day.

We are also nominated contractors for the local High School, where we carry out all the ground works. We generally cut and overmark their three football pitches, one rugby pitch on a weekly basis. In the summer, the 400 metre athletics track and field events are overmarked weekly.

Other duties the team perform on the campus include flag paving, tarmac renovations, fencing and hard landscaping, as well as maintaining the flower and shrub borders. 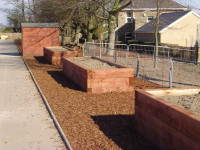 We also assist other departments with outside events on the campus. The annual Friends of Ashville College Bonfire, which is open to parents, pupils and local residents, saw around 500-600 people walking across my beloved rugby pitches to enjoy the event! We then have to breakdown and clear for the rugby fixtures the following day.

We encourage the children from the Pre-prep and Junior school to assist with some of the gardening tasks as part of the Green Flag scheme. This includes planting trees and bulbs across the whole campus and growing their own vegetables in their respective gardens on the site.

Hard landscaping jobs, such as tarmacing, concreting, fencing and paving are undertaken in the winter months. We also do tree works, shrub pruning and mulching of the garden borders during this period. We are currently laying a new fire evacuation path at one of our boarding houses - there are approximately 350 flagstones to lay. Once completed, we'll do some soft landscaping to soften the area up by planting trees and bulbs.

When the winter weather turns nasty, we also carry out snowploughing and gritting around the campus. When the snow and frost arrives,

it may be enjoyable for the pupils, but it gives us a logistical nightmare, especially when you see hundreds of snowmen appear on the playing fields and happy pupils laughing and joking. But, all I can think about is my poor grass .. and then, when you get asked to mark out a pitch because the coaches want to take lessons and there is about three inches of laying snow on top, I often think 'I might only be a groundsman, but at least I have common sense'!

And then there are the numerous times when people ask us, when the college breaks up for the summer holidays, if we get the full eight weeks off like the pupils? I really want to answer, "yes, and that the pixies come in through the night and do all the grass cutting, strimming, weeding and digging over the flower borders," but, of course, I can't, in case we offend.

During the rugby season, a few years ago, a player got injured and an ambulance had to be called out. On its arrival, it came on to the surround of the pitch and, due to at least three weeks of rain and snow, subsequently got stuck. So, they called for another ambulance and, when that arrived, it also got stuck! Fortunately, we managed to get that one back on the tarmac and the lad was taken off to hospital. Then we hitched a tractor to the first ambulance and that also got stuck! We eventually had two tractors attached to each other, and a chain around the axle of the ambulance and, finally, managed to get it off the playing field. I don't know who was more embarrassed, the ambulance crew or the grounds crew for getting the tractor stuck! I was just glad it was before the invention of YouTube!

A groundsman's life at Ashville College is never dull, due to the heavy schedules and sports programmes, but at least its enjoyable. And then there are the perks of the job, like seeing the sporting heroes of today when they pay the college a visit. These have included Freddie Flintoff (there's another funny story there, but I best not tell it!), Jimmy Anderson, Graham Hick, Martin Johnson, Austin Healy, Mark Cueto, Barrie McDermott and Martyn Moxon.

There is so much more we do in our daily and seasonal schedules, but it would take more space than is available here. What I can say is that it's great to be part of the history and development of the college.

The school motto is Esse quam videri, "To be, rather than to appear". I think that perfectly suits the groundcare team here at Ashville.