0 Welford Road home of the Tigers.

Welford Road home of the Tigers. 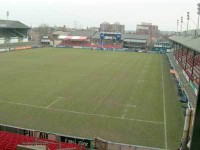 Leicester Tigers are renown for running rugby and what better pitch to run out on than Welford Road. Last week I had the chance to return to Welford Road a ground I played on some 27 years ago making my senior playing debut against the likes of Clive Woodward, Dusty Hare, Peter Wheeler and many other seasoned Internationals.

Welford road is an inspiring ground and with capacity gates of 16,500 it is no wonder Leicester remain one of the toughest teams to beat when playing at home. They even get crowds of 9,000 just to watch the development squads. 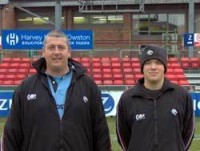 I met up with Steve Packwood the head grounds man who is responsible for looking after both the Welford Road pitch and academy's three pitch training ground.

Steve has two staff who help at both the training ground and Welford Road. Tom is a trainee here and we also have Cheryl Hill, grounds person, who has been at the club for 15 years and is now permanently based at the training ground at Oval Park. (Photo L-R Steve and Tom).

Steve has been with the Tigers for 15 years but took over as Head Groundsman three years ago. The Welford Road pitch has three large stands surrounding the pitch and like most stadium pitches suffers shade problems, from late September until March. This often results in the soil remaining cooler and wetter in the shaded areas. This in turn can and inevitable leads to loss of grass during play in the winter months.

Loss of grass cover is one of Steve's biggest challenges, We are always trying to ensure we keep as much grass as possible, keeping the surface open and free draining. This has been made easier with the new drainage system we now have.

Hewitts installed primary drainage @5 metre centres, over laid with sand bands @1 metre centres. This primary / secondary drainage system has made a tremendous difference to our pitch quality. Before we always suffered water logging but now we do not get any problems during wet 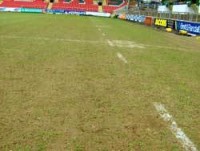 Steve helps keep the sward open with a programme of aeration combining the use of a Vertidrain (hired in) 3-4 times per year coupled with regular slit tining with our own slitter.

With air temperatures now consistently rising above 10 degrees, Steve is confident that the sward will respond and begin some sustainable growth for the remaining part of the playing season.

The Tigers along with the development squads do not finish their playing season until mid May. Steve then tries to complete his end of season renovations as quickly as possible at both Welford Road and training grounds.

Players begin training in late July and have pre-season matches at Welford Road in mid August. This effectively gives us a short period of time to establish our new sward. First priority is to get the stadium pitch up together starting our end of season renovations as soon as the last match is played.

Essentially Steve starts by scarifying and opening up the sward with the aid of tractor mounted scarifiers and slitters, forming a key for both top dressing materials and seed. 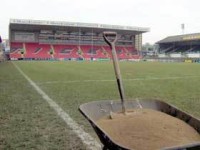 50 tons of top-dressing is applied to the pitch to restore levels and provide a medium for the new MM60 grass seed. If the weather stays dry Steve's only method of irrigation is in the form of self- travelling Javlin sprinklers that operate from mains water supplies.

Once the new sward has established .it is maintained at a regular height of 25mm to encourage tillering and improve sward density. Steve will then increase the height of cut up to 50mm ready for the new season.

A fertilising programme is implemented to promote health grass growth and his based on soil analysis results that are taken prior to the renovation works commencing.

A suitable feeding programme is then applied to maximise turf quality and growth.

Once the season has started Steve sets regular maintenance programmes prior to and after matches.

Match preparations begin straight after the last game; the playing surface is repaired, all divots and scars are replaced / heeled in. The pitch is then rolled to return levels and then brushed and mowed to tidy the playing surface. Frequency of mowing is dictated by both the weather and grass growth, Mowing has been made a lot easier since they had a triple cylinder ride on mower, the pitch can now be cut in less than an hour. The Tigers always train on the pitch, usually on a Friday morning for about 2 hours whatever the weather, which only leaves Steve, Friday afternoon and Saturday mornings for final pitch preparations, (Stripping up and marking out). Which can be a tall order during the winter months when the pitch is more susceptible to cutting up.

The pitch is over marked using a wheel-to-wheel transfer marker using string lines for accuracy.

Steve also has to accommodate live TV matches for sky. Often these will fall on different days and require a lot more planning. Also there will be more pitch markings in the form of Advertisements. These can cause a lot of distress to the turf, the dye masks over the grass plants living tissue, preventing the plants ability to photosynthesise. Which over time causes the grass plant to stress out and decline. It is in these areas that Steve sees the worst wear.

Machinery and equipment at the ground is fairly basic however, Steve does not want to invest in any new equipment until a decision as been reached about the proposed ground share with Leicester City FC at the Walkers Stadium.