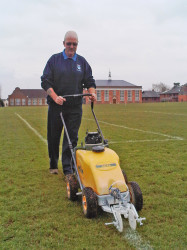 Wellington School in Somerset, established in the 1800s and catering for over 700 private pupils is the latest facility to change from conventional line-marking paint to Vitax Supaturf's highly concentrated Supa Stadia Eco.

Head Groundsman David Lee, who's been at the school for almost 30 years, has five rugby pitches, three cricket squares, hard surface netball courts, tennis courts and both grass and astro turf hockey pitches to maintain and he doesn't mince words when it comes to quality.

"We use an awful lot of paint and if it doesn't work I say so," he explains. "We found in September that our lines weren't holding and we changed to Supa Stadia Eco in October/November. An awful lot depends on the weather but I think the lines are now staying put."

Vitax Supaturf's Glen Howard, who's been working closely with David, says that Supa Stadia Eco, due to its long-lasting qualities should give a fortnightly mark, which would save the groundstaff both time and money. The Supaturf Xcel line marker machines, specifically designed to deliver the concentrated paint and used at Wellington School to ensure they get the best from their new product have also gone down well with David's team.

"The lads said they're happy with the paint and it's easy to put down using the Xcel machines," David confirms. "Because the Xcel has separate tanks for the paint and the water they don't have to mix it, and can top up with water on the way round."

Meanwhile Salisbury City Council, set to save a third on line marking costs this season since switching to Supa Stadia Eco, are doing just that. "It's working really well," confirms groundsman Bob Skutt. "We're using only seven to ten litres of concentrate per week, whereas before we could be going through thirty to thirty five litres of conventional line marking paint."