0 Wembley stadium - from ‘rock on’ to ‘touchdown’

Miner's son, Tony Stones, looked after the gardens at school in Barnsley. He was always going to go into horticulture and studied it at college, but his interest soon switched to groundsmanship. Under the then YTS scheme he worked first at a local golf course and then at local authority bowling greens and cricket pitches. In 2000, a chance to work at Barnsley FC came his way and he took it.

"I had to learn quickly about looking after grass on 95% sand. This was a different skill all together to fine turf," Tony recalls.

After just nine months at Oakwell, Tony became head groundsman, and was there until 2009 when a life-changing opportunity came along, to take charge of the pitch at the new Wembley Stadium. As we stand centre pitch on what turned out to be the hottest day of the year Tony admitted that, like every football groundsman, he had dreamt of looking after the most famous pitch in the world. Four years ago the dream did become reality.

"Initially, I was in awe of this magnificent, enormous stadium, but soon got to grips with the practicalities of looking after the pitch, he said in a typical down-to-earth Yorkshire way.

The biggest single difference between doing the pitch at Wembley and his time at Oakwell, overwhelmingly, is the intensity of the schedule and the diversity of usage, not just football of course, but both forms of rugby, and now the American game known simply by the letters NFL. There is also, of course, the pressure of having to meet the expectations that go with the most iconic pitch in the world. Does Tony feel the pressure?
"Not really, everything's fine if you stick to your routines."

It's obvious he means it, and is relaxed about things. He's a consummate professional though and enormously proud of what he and his team achieve. He has three full-time assistants - Karl, David and Brendan - and, when necessary on event days, calls in up to twenty locals from other pitch caring quarters to form a 'divot group' to help with tidying up and minor surface repairs.

The markings at Wembley have always been special. Like the billiard table green that's always been the expectation of a game at Wembley for ninety years, the white lines there are as defining as the laws of the game. Tony is 'old school' here and uses a wheel to wheel linemarker, marking to a string line.

"Why change something that's not broken," he said.

From the stadium opening in 2007, the pitch had been a fibre-sand turfed surface. At the time, it was considered sound thinking to pursue the tried and tested pitch technology that had worked unfailingly for the 'old' Wembley. There was no anticipation of the problems the different micro-climate of the new stadium structure might cause. The pitch did have to be re-turfed eleven times in three years so, in 2010, the decision was made to switch to a Desso pitch.

"Turf pitches do pose problems in big stadiums where light and airflow are restricted, and more so where demand and variety of use is as high as it is here at Wembley," said Tony

"From the first game here on the Desso surface the difference was enormous. There's no going back. It's all about the now and the future, and we know we have a pitch set-up that gives the best possible surface for the whole range of sporting events that are staged here." Installation of the Desso Grassmaster was carried out by contractor J Mallinson of Ormskirk, who are also regularly engaged for major renovation work, and what Tony calls 'the mini-renovations' to accommodate the NFL games now a regular feature of the Wembley diary.

The stadium takes great pride in its innovative approach to event staging. It has an open mind, but will always be wary of putting on something that will compromise the range of events already in place. Desso fits perfectly into the FA's business plan.

The shade lines are much harsher than in the old stadium and growing is hampered severely. From October until February there is no sunlight at all. The retractable roof is a useful ally to Tony, giving valuable airflow, especially in winter months, to help dry off disease-risk moisture. A 550ml an hour drying rate since the installation of the Desso means the pitch can cope with a really heavy storm, too. The Sub-Air system installed at the same time can double this if need be.

"If you have a good drainage system, you don't need a total closure of the roof," said Tony.

In the prolonged dry spell this summer he says wetting agents have been a big aid to effective irrigation. PSD, whose local contact John Harker provides monthly advice to Tony, has come up with a special mix specifically and exclusively to suit conditions at the stadium. 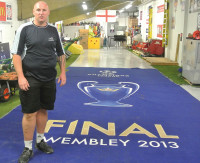 The FA Community Shield, the official curtain-raiser to the coming season, was the next big day at Wembley, though Manchester United and Wigan doing battle seemed far off with ninety-plus on the thermometer in 'old money'.

What of the routine pre-match for the second Sunday in August? Tony said he would start double mowing on the Thursday, and do the same again daily, including match day. He would also mark-out the pitch three, maybe four times pre-match, depending on weather conditions. After the game, he'd be running five rotaries to clean up the surface and use temporary support staff to help tidy up. After every game, the pitch always gets a full divot.

"The day after a match you can't tell the pitch has been played on. Everyone expects that to be so," he says proudly."

Unlike many other big venues, Wembley has always been used to large non-sporting events. There have been pop concerts there since the 1970s. The new Wembley is a multi-purpose venue par excellence. There are five weeks of concerts in June and July, then it's pitch re-generation time. It's part of the annual routine for Tony and his team. They are used to it.

The concert season, far from being irksome, is seen by Tony as a positive. "It's a time to turn the pitch around, to clean it up and re-generate it," he says.

This year, the Community Shield is just twenty-six days after the last concert and, walking the length of the pitch just thirteen days after re-seeding, it has a rich, strong grass covering.

Tony uses a 100% ryegrass mix exclusive to Wembley. It's even known as the Wembley Special mix, and no one else can use it. It's the ultimate bespoke grass. Tony says he uses about four tonnes of it over a twelve month period.

There is mounting expectation on Wembley authorities - because of the stadium's iconic status and the quality of the facilities - to get a balanced spread of events. Starting with the Manchester United v Wigan Athletic game, there are twelve big days there in the following three months: four football internationals, three of them World Cup Qualifiers; the Rugby League Challenge Cup Final; The Danone Nations Cup, a global football tournament for the 10-12 age group; Saracens v Toulouse in the Rugby Heineken Cup; the two Rugby League World Cup semi-finals and, this year for the first time, two NFL games - oh, and not forgetting Pink Floyd's Roger Waters production of The Wall.

As far as NFL is concerned, a team of six that look after the Superbowl come over for the Wembley match specifically to handle the marking. Tony and his team stay in charge of the grass itself though.

"We work very closely with NFL Head Groundsman, Ed Mannigan, and discuss in detail with him particular requirements ahead of each game," says Tony.

Tony has now done four NFL games at Wembley and pretty much knows the ropes. Cutting has now changed a little to suit the effects of the intricate marking and is now down to 25mm so that, to get the desired 30mm length for the match, a second cut only tops the lines and avoids the need for secondary marking. This also leaves less paint for Tony and his team to clear for a return to football marking. The American team uses an airless sprayer to apply paint. Tony tells me that a new paint technology from Australia, containing sugar molasses, is under investigation by Wembley to try and reduce the time it takes to remove the paint from the pitch. 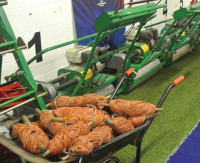 "The aim is to get to a situation where it simply jet washes off, but we're not there yet," says Tony. "It can stick around for three to four weeks and, at the moment, the best means of erasing it is scarification and renovation."

The fact that the NFL is doubling up this year shows its growing popularity over here, and Wembley is the proven venue. The Minnesota Vikings take on the Pittsburgh Steelers on Sunday 29th September and, four weeks later on Sunday 27th October, the Jacksonville Jaguars do battle with the San Francisco 49ers.

Just fourteen days after the first of these, there is England's World Cup qualifier against Montenegro on October 11th then, days later on October 15th, there's the crucial game against Poland. Tony and his team, with the help of Mallinsons, will be in mini-renovation mode. This works and works well. Grass germination is speeded up by 1000 watt SGL rigs and Wembley has twelve of them, so it's just as smooth switching from NFL to football as it is from rock concerts to football. 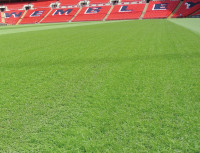 Independent testing shows that Wembley's pitch is indeed great. ProPitch consistently scores it at least 64 out of 66 over a series of criteria, such as ball roll, impact on players, weed grass content, root depthand and moisture content. Prior to the 2010-11 season, just after the Desso had been installed, testing company, ProLeisure, scored the new pitch higher than Manchester City's then City of Manchester Stadium, which had been voted the best in the Premier League. Wembley's Desso was off to a perfect start and has more than maintained its high standard since. A test is carried out three days prior to every major game. A consistent 5-star rating for 98% or more speaks for itself.

"The effort and energy - and passion - that Tony and his team put into the Wembley pitch has been more than enough to keep it at its peak for sporting events here," said Simon Smith, the FA's Stadium Services Associate Director.

Ever the perfectionist, Tony is never totally content. "There's always room for improvement," he says. "Even if we score 66 out of 66, as we have done, I'm never completely happy. My team and I always want to get a better and better Wembley pitch."

If you've never been to Wembley, you must. Check the array of events coming up on the FA's Wembley Stadium website www.wembleystadium.com.