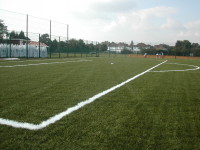 Not a headline we ever hoped to see but it is, in fact, true.

This product has also been installed by Kestrel just months earlier at Millwall FC's New Den Stadium and meets FIFA 2 star testing requirements even when laid onto a dynamic stone base.

FIFA 2 star is the highest certification which artificial grass can achieve and is a first for both Kestrel and Tiger.

"We were keen to ensure that our client had been through all the options as far as the final surface was concerned" comment Kestrel's Joe Boniface, who oversaw the project.

"Once it was decided that a 3G pitch would provide the best value for the customer, we showed them everything from fibrillated yarns to hockey/football 3G surfaces through to the many ranges of monofilament that are available at the moment. The one thing that the school would not compromise on was the quality and durability of the finished surface".

Once the school had decided that 'Real' was the best product available the decision was made. Due to limitation on budgets the scope of works had to be revised, but despite the opportunity to make further savings with alternative grass products; the school stuck to their original decision to have 'Soccer Real'.

Kestrel also installed a new colour coated MUGA surface complete with fencing, as well as upgrading the synthetic turf cricket facilities at the school, which has had pupils hailing from over 60 different nations.

The fencing chosen for both the artificial grass pitch and the MUGA was a very robust twin guard weld mesh with a 1.2m rebound panel which is guaranteed to last 10 years.

"We strived to ensure that the whole project provided best value and had a sustainable quality" Joe Boniface continues." There is no point in offering warranties for one element of the works if another part is going to let it down over a longer period of time".

Matt Gilbert was delighted with the way the project had been managed, coming in on time and on budget "The site management has been superb and all the Kestrel operatives have been very efficient in their communication which ultimately ensures we have got a very smart new facility we can be very proud of."

The end users - the school's students, are already clamouring to use the surface despite already having three natural grass pitches, which the school has been discussing with Kestrel to upgrade next year.