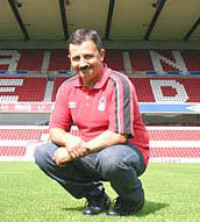 Wembley Stadium is delighted to announce the appointment of Steve Welch as Head Grounds Manager.

Steve is currently head grounds manager at Nottingham Forest's City ground. He was chosen from over 50 applicants and is due to start work at Wembley at the beginning of October this year.

Steve will head up the grounds management team and will be ultimately responsible for keeping the Wembley Stadium turf in mint condition for the Stadium's prestigious line-up of events including The FA Cup Final, home Senior England Internationals and the Rugby League Challenge Cup Final.

His expertise was formally recognised in 2002 when he was named Professional Football Club Groundsman of the Year. Steve has vast experience of preparing pitches for music events which will be an important part of the job when major concerts return to Wembley Stadium next year.

Steve Welch said: "When I saw the job at Wembley advertised, I just knew I had to apply. Working at the national stadium is a once in a lifetime opportunity and I am thrilled that I have been chosen to take on the prestigious role of ensuring that the new Wembley Stadium's playing surface is as good, if not better than its famous predecessor. I can't wait to get started."

Peter Swordy, head of HR at Wembley National Stadium Limited, said: "We received a high number of quality applications for this position, making the decision a difficult one. However, Steve's excellent track record and breadth of experience in maintaining world class pitches together with his managerial skills clinched it and we were delighted when he accepted our offer."

The new Wembley will be the most exciting stadium in the world and the playing surface will be its centre piece. The turf is currently being grown off-site and is being maintained to the highest standards before its transfer to north-west London at the start of next year. The new pitch will use the latest technology that has been tried and tested to produce a top quality playing surface for the new 'Venue of Legends'.

Editor's note - Pitchcare would like to offer Steve our sincere congratulations and wish him and his team every success.