0 Wentworth keeps faith with Toro in biggest ever deal 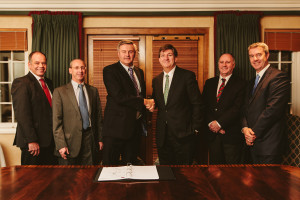 The world-class tournament venue has been a Toro customer for 25 years, and Lely is delighted to see the club sticking with the company's machinery as part of a new agreement.

It makes it one of the biggest deals ever to be done by Lely, says the distributor.

Kenny Mackay, director of golf courses and grounds at Wentworth, is a long-standing Toro fan, having used its machines previously at The Belfry. He says: "There was never any question in my mind.

When it came to re-signing, it was always going to be Toro again. They're the most reliable machines there are and the build quality is superb. The most important thing is the operators here think that, too. The feedback from all the staff was strongly in favour of Toro."

So is there a particular machine impressing Kenny? "That would be the new Triflex 3420-D," he says. "The quality of cut is most impressive and it's a machine moving with the modern times."