West Ham United FC has revealed new images of what its new Olympic Stadium home will look like once the club moves in permanently next year. 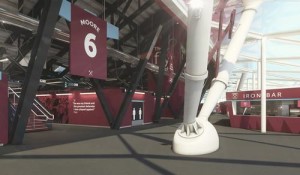 The project to transform the stadium is reaching the final stages and the club has announced that one of the curved stands will be named after its long-serving former captain Trevor Brooking.

Brooking won't be the only former player to be celebrated around the stadium - pictures show a giant replica of Bobby Moore's legendary No.6 shirt hanging above the concourse of the stand which will carry his name.

Located within the Queen Elizabeth Olympic Park in East London, the stadium - the main venue for the London 2012 Games - has been completely transformed to host football at a cost of £272m.

By the time it welcomes West Ham in August 2016, the stadium will be in its third configuration, having also hosted games during the Rugby World Cup earlier this year.

Designed by sports architects Populous, the stadium will be the only stadium in the UK specifically designed to host football, athletics, rugby, cricket and concerts.

Capacity has been scaled down from the original 80,000 to 54,000 for football and the flexible seating will allow the stadium host the IAAF World Athletics Championships in 2017.

The seating system means the original running track has been saved, with the automated system allowing all four sides of the lower bowl to be moved over the track when in football mode.

Other works completed since 2012 have included the removal of the fabric roof used during the Olympic Games. It has been replaced with the world's largest cantilevered roof - measuring 45,000sq ft in size and 84m tall at its deepest point.