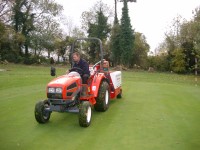 The machine, one of only a few in the UK, provides deep soil and subsoil decompaction through the injection of compressed air.

Course manager Adam Hartley says: "The results have been fantastic, both on the main course and the nine-hole course.

"We tried Gwazae treatment on one hole back in 2006 and I was doubtful of the results at first - but that hole, which had been unplayable for half of the winter months previously, was only closed for a short time the following winter.

"It has been consistently good ever since, so we took the decision to do every hole after the terrible winter we have had, not able to get on the course for several months with snow and ice."

Following the Speedcut treatment the greens have been playing consistently well and Adam, who has been at the club for nine years, is delighted at the results. 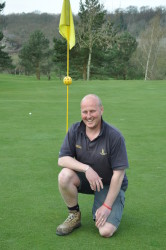 "I just cannot fault the Speedcut team, always efficient and helpful with great advice and attention to detail," says Adam.

Being on clay at West Chiltington - within sight of Chanctonbury Ring, the famous West Sussex landmark - Adam has his work cut out with aeration and drainage. He carries out regular hollow-coring and surface treatments.

"It's a constant battle on this sort of soil but we get very rewarding feedback from the members and other players about the condition of the course," says Adam, who was previously at the RAC Golf Club in Epsom and at Kew Gardens where he was a specialist in rhododendrons.

West Chiltington Golf Club was built in 1987 and designed by Max Faulkner and Brian Barnes. The course has been owned by Martin and Debs Ormrod since October last year.

"We do not have any temporary greens, making the Gwazae treatment ideal for us and leaving no damage to the surface because the fissures are filled with 'Breaker' soil penetrant material and cover over naturally.

"Because play is 12 months of the year and we have 500 members and welcome green fee players the pressure is on to maintain perfect conditions - particularly as we have three different types of soil here . . .clay, sand and loamy.

"We get a lot of praise for the course which is incredibly rewarding for myself and the team."

Barry Pace, Speedcut Contracts manager, said: "We were pleased at the results at West Chiltington and it was a delight working the Adam and his team.
"The original green, the eighth, was one of the very first we undertook with the machine and the improvement was very noticeable with it being playable when it would have normally been closed.

"We have since found on the worst scenario greens that filling the probe holes with a dry sand, or soil amender, greatly increases water movement and allowed the greenkeepers to maintain a greatly improved surface. 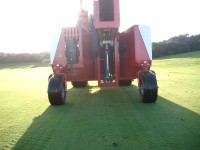 "The Gwazae is proving more and more popular on golf courses, particularly those with compaction problems, as clubs start to recognise the process and its benefits."

Speed of operation and depths achievable with a Gwazae make this invaluable in relieving soil pans and deeper compaction around areas of high wear on the golf course.

Because of the depths reached this makes the Gwazae aerator more effective than traditional machines such as verti-drains or groundbreakers when dealing with pans and deeper drainage issues. It allows these to operate far more efficiently in subsequent aeration as the fractured soil below allows the full depth of the machines to be possible.

Speedcut Contractor's tractor-trailed Gwazae, manufactured in New Zealand, decompacts soil to a depth of up to 700mm using a probe and compressed air with the added ability to inject amendments into the soil profile if required.

"Our Gwazae can cover relatively large areas quickly and, depending on conditions, can cover up 12,000 square metres a day," says Barry ''but with greens it is nearer eight to 10 depending on size and access''.

"We particularly recommend use on tees, fairways and greens as well as sports pitches where serious compaction has become a problem. It can also be used for decompaction around the base of trees."

Barry added '' We have done some extensive trials with the injection process this winter, Adam supplied 'Breaker' for the greens at West Chiltington and we injected around 20cc solution per blast, this having the added affect of providing some longevity to the fissures and to further encourage water movement through the soil.

"Other products we have sourced are looking very promising as expected with the ability to get flocculation along the fissures with liquid calcium, stimulation to the soil profile with humic acids and increased water movement with wetters.
"We are hoping to trial some of the new soil penetrators to see if we can increase even more the way these products work on the soil.

"With one particular range we have sourced we are able to tank mix a variety of products tailoring the mix to deal with a whole range of issues such as soil structure, drainage, microbe stimulation, black layer and even phytophthora in trees.''

*Speedcut have also been busy on other golf courses in the south, including Ham Manor, Angmering, where they have been rebuilding tees and bunkers, and in Kent at Sundridge Park Golf Club they have been reshaping 20 bunkers.

At Castle Royal Golf Club in Berkshire, Speedcut have been relining a large Lake and at Foxhills Golf Club and Resort in Surrey they have been reshaping bunkers.