0 What a load of Rubbish! 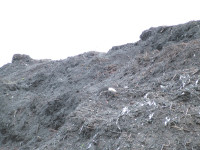 Whilst on a recent trip to Denmark, I was introduced to Claus Nielsen, a friend and supplier to Chris Hague (Head Groundsman at Parken Stadium, Copenhagen). With a few hours to kill before the mighty CFK saw off Manchester United in the Champions League, Claus took me up country to his place of work, The Solum Group.

I wasn't entirely sure what to expect but, on arrival. I soon discovered that the company create top quality compost from everyday garden waste, and on a large scale.

Apart from beer and bacon, the Danes are gaining a big reputation for future sustainability. In this short trip, I'd also visited Alex McCombie at the Ledreborg Palace Golf Club where growing grass at a premium venue is going to be without chemicals and few nutrients. Previously Pitchcare has published articles from the likes of Ian Tomlinson and Chris Haspell (other ex-pats) about the sustainability of golf in Scandinavia and, elsewhere in this issue, Paul Lowe, Head Greenkeeper at Ruddlan Golf Club in Wales, also talks about the subject.

I'm a great believer in recycling to protect the environment so it was refreshing to see 100's of tons of typical garden waste being brought into one of the Solum depots direct from the local community tip on lorries. All day every day, council waste is brought to the depot, deposited and then spread out to create vast piles of material to break down and become re-usable compost. 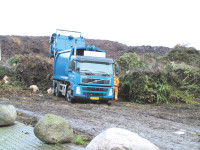 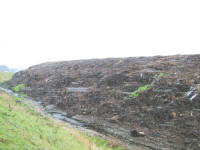 The Solum company rotate the waste over a three year cycle, taking everything from grass and leaves to branches and tree stumps and turn out a uniform, disease free, compost (all compost contain fungi, bacteria and actinomycetes, but the pathogenic micro-organisms get killed during the process) that can then be used neat or mixed with soil and sand to make improved soils and USGA specified root zones.

The UK has been fairly slow to catch on but, with land-fill becoming more expensive, the viability of recycling waste has come to the fore.

Solum only take green garden waste at their composting sites, they do not use kitchen waste. Each year they start a new pile or 'mattress' as they describe it, which is a long rectangular heap. Each month they build the mattress up in layers; usually each month's waste will be built up to approx. 0.5 metres in height (2 mattresses every year, 1 mattress at each compost site, approx. 50.000 tonnes garden waste per compost site per year).

These mattresses are about the size of a football pitch (1 hectare) in square meters. Through the year the mattress is built up with different layers of waste; grass clippings through the summer, leaves through the autumn, branches and tree debris through the winter.

All the time that the mattress is being constructed, heavy machinery drives up and down the pile spreading, and tearing the material. They use a flail machine to cut up the material to help it mulch down quicker. The machines are always working on only half of the mattress at a time. This half is aerated just before shifting to the other half and thus leaving the material to compost and rest for 2 weeks.

During the second year, the mattress is turned four times using large excavators. This mixes up the layers of waste and helps with the organic material decomposition. The staff will also water down the mattress from time to time in the first and second year to encourage further bacterial activity in the process and to prevent self-ignition. The third year the big compost pile is screened, refined and sold.

Whilst the mattress is being built the temperatures from bacterial activity rise in the pile, maintaining a temperature of 60 to 80 degrees Celsius. This is sufficient temperature to kill off pathogenic fungus spores and weed seeds that are prevalent in garden waste.
Over the three-year period the garden waste breaks down to a dark organic material. At this stage the company then put the material through giant rotating barrel sieves, stockpiling the screened compost. 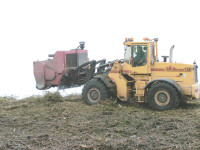 Any material that is still too large to use is then placed at the bottom of a new mattress to continue breaking down for another three-year period. Large woody items such as tree stumps and branches are shredded and sent to the local power station to be used as fuel.

The depots that I visited are now producing approximately 100,000 tons of top quality compost every year. As a thank you to the community, the depot send a few lorry loads over to the local tip on designated days for house holders and gardeners to help themselves.

The purpose of composting is to stabilise and homogenise green active waste, reducing or inactivating pathogens. Composting causes the formation of humus (soil fertility) and the degradation of organic micro-pollutants.

The mountain building of the waste produces rising temperatures. At around 35-45 degrees C there is maximum variety in micro-organisms participating in the breaking down of the waste, at 45-55 degrees C the maximum bio-degradation occurs of the organic material and the temperature continues to increase to around 70-80 degrees Celsius where the composted organic waste reaches a maximum of sanitisation.

The bad microbes are killed off and the waste cools down again, which further encourages new beneficial micro-organisms to become active and break down cellulose. Nitrates are formed from Ammonium, and lignin is broken down to form humus.

The mattresses are watered down to further encourage microbial activity but, on occasions, the heat in the mattress can cause combustion and rather than soak the burning area with water, excavators are used to extinguish the fire by bringing burning material to the surface. Interestingly adding water to an internal fire at this stage of the composting process would often compound the problem by helping temperatures to soar and increase further combustion.

The compost that is finally formed is full of beneficial micro-organisms which improve soil structure and plant residue turnover. The produced compost suppresses diseases and improves mycorrhiza formation. It is a source for stable humus, improving workability and drainage on clay-loam soil and the water holding capacity on sandy soil. 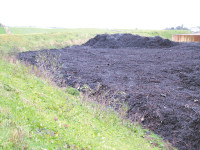 The compost is also a great provider of slow-release nitrogen-fertiliser as well as Phosphor, Potassium and micronutrients. It also helps to raise the pH of some soils, to which it is added. Importantly it is free of weeds, which is great when blended in new topsoil mixes and root zones.

Many golf greens, tees, and major sports fields (such as football pitches) are established using manufactured root zone. In these cases, there are highly specific requirements regarding water retention and percolation rate (saturated hydraulic conductivity) in the final root zone.

These requirements, together with specific analytical methods, have been put forward by the United States Golf Association to obtain a maximum amount of playing time on the green while maintaining a high-quality grass cover (USGA, 2004). The main component of topsoils for USGA greens is very uniform sand usually mixed with some organic material. Again, mature, uniform, weed-free and fairly nutrient-low compost types are best suited for this application.

In a world with declining resources there is huge potential, as well as clear benefits, for the use of compost in amenity, landscaping and private gardening.