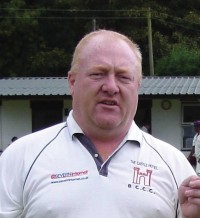 Stephen Morris - or Minor, which has been my nickname since the age of five! I work as Payroll Manager/Assistant Accountant for a Timber Merchant/Sawmillers and have done so since June 1983. I am also responsible for the cricket ground for Bishop's Castle Cricket Club in Shropshire.

Single since 2001. I have a daughter Chiara who is eight and a half.

Who's your hero and why?

What is your dream holiday?

Spending time in the Lake District or at a Marillion weekend. Marillion are a rock band I have followed since 1982. They have a convention weekend every so often. I went in 2001, 2002 and 2005 and it was superb. And Weston-Super-Mare - this year is the twentieth time we have had our 'Jolly Boys' outing.

What annoys you the most?

Drivers, who (a) don't use motorway lanes correctly (b) don't indicate, and (c) don't acknowledge you when you have given way to them.

What would you change about yourself?

Very boring one this, lose a few pounds from my ample frame.

At the moment, Gordon Brown.

Favourite record and why?

Script for a Jesters Tear by Marillion, followed by all their subsequent albums. It's the album that shaped my musical life way back in 1983. Or anything by Bob Dylan (my father's influence).

Who would you choose to spend a romantic evening with?

Bit stuck on that one at the moment!

If you won the lottery what is the first thing you would do?

If it was a big win I'd pay off mine and all my family's mortgages, then offer to buy our cricket ground and all the relevant 'new' mowers and kit that I could buy.

If you were to describe yourself as a musical instrument what would you be?

What's the best advice you have ever been given?

What is your favourite smell?

What three words would you use to describe yourself?

To be any good with wood like my father and brother who are both carpenters and joiners.

What makes you angry?

People who get something for nothing whilst we are all working our socks off to earn a living.

Supermarkets should be forced to sell beer at a similar price to pubs, at the moment they have an extremely unfair advantage over pubs.