0 What comes down, must go up

Water is one of the most valuable resources for course managers to utilise on their golf course. Be it removal through drainage or addition by irrigation, your ability to manage and manipulate water efficiently is fundamental in helping you achieve your targets. Changeable seasonal weather patterns, often resulting in higher levels of precipitation falling in shorter periods of time, is making achieving adequate drainage of your land ever more challenging. 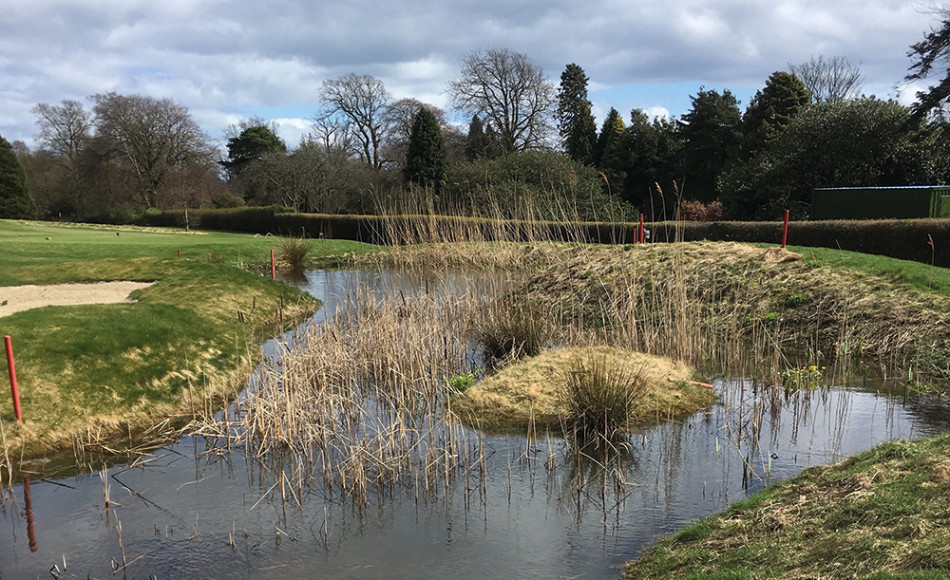 This article, by Derek Fullerton BSc (Hons), aims to highlight potential ways in how to meet these challenges, and the resulting wider benefits that the responsible management of water can have on our vital fresh water ecosystems.

To begin, let's get a clearer understanding of the resource we are dealing with. Firstly, take a minute to contemplate the following…. every bit of water that you come across in your daily life has been on earth since the planet was formed. Whether in liquid, gas or frozen form, it has been doing the rounds. There is no 'new' water, we cannot produce it. The fact that every life form on the planet is dependent on it in some way emphasises its importance. Ensuring water retains the ability to recycle itself via a process known as the global water cycle (Fig. 1.) is essential in maintaining its availability.

As a molecule, water has some unique attributes. No doubt you will be aware from its commonly recognised chemical name H2O that water is made up of two positively charged hydrogen (H) atoms and a single negatively charged oxygen (O) atom (Fig. 2). This structure enables water molecules to be greatly attracted to each other, with the -O bonding tightly with the +H, referred to as cohesion. A very similar relationship that you may have come across exists in soils between negatively charged clay particles and positively charged nutrient ions, this being the backbone of a growing medium's cation exchange capacity (CEC). Water is also a superb solvent, with the ability to dissolve a vast number of substances, whilst also being one of the few molecules which is lighter in density when it is frozen compared to its liquid form. Just as well if you consider icebergs in relation to global water levels!

The consequences of wetter winters and extreme rainfall patterns will be recognisable to many course managers. Outdated drainage systems unable to cope with rising water tables and increased flow rates, this leading to prolonged periods of saturation, playing surface decline and inevitable course closures. So, if water is coming down quicker and in greater amounts than your course can absorb, how can you combat this? Instead of thinking of ways to remove water as quickly as possible off the course, perhaps you need to recognise the value of controlling it on the course prior to exit. 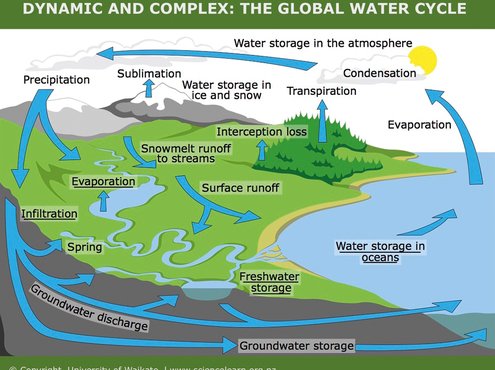 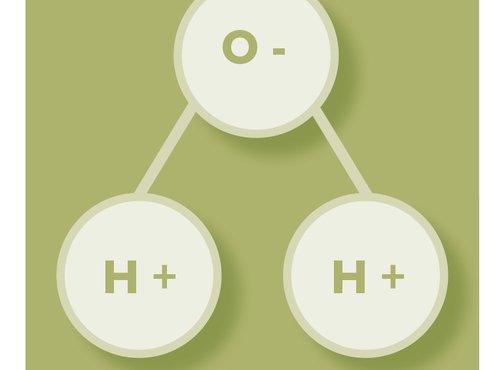 The use of constructed wetlands in the treatment and recycling of storm water is gaining popularity in many sectors. Their ability to 'catch' water runoff during extreme weather has been recognised as a way of controlling and reducing flow rates prior to discharge in to land drains. Also, aquatic fauna native to wetlands, referred to as macrophytes, have been shown to reduce concentrations of a number of pollutants including nutrients.

Some golf courses have begun to recognise the potential value of utilising constructed wetlands, with one being Dunnikier Golf Club in Fife, Scotland. Prior to course manager Paul Murphy taking over the parkland course, the land was regularly waterlogged after heavy periods of rainfall. The old pipe drainage system could no longer cope and installing a new system was not a feasible option due to financial restrictions and a lack of natural drainage exit points.

Paul realised his plans to implement an agronomy programme to improve the playing surfaces would be hindered until he got the land draining quicker, particularly away from areas of play. One such area was the 9th green which regularly flooded, resulting in water streaming through to the nearby car park. With no natural exit point available, the decision was taken to incorporate a wet land feature at the rear of the green (Fig. 3 & 4). New perimeter drains were installed with the wetland used as an exit point, resulting in the feature holding water at varying depths for the majority of the year. Along with the improved drainage of the green area, run off to the car park was prevented, this helping to limit storm water entering ground water drains. 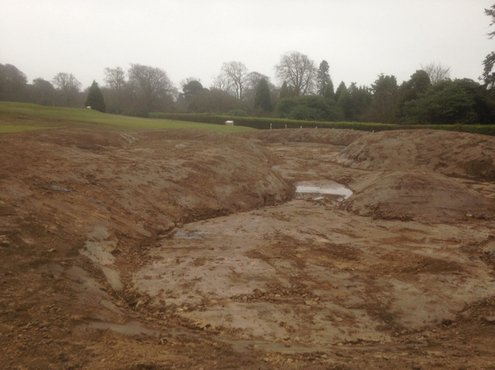 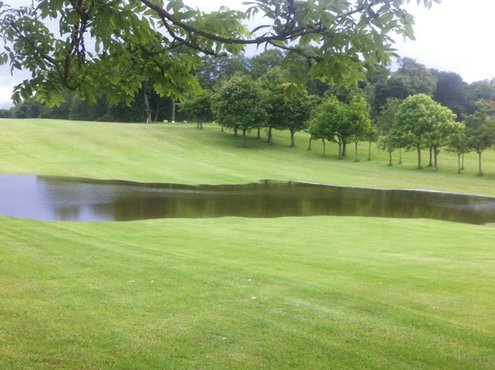 The topography of the land at Dunnikier also resulted in large quantities of standing water on a number of fairways (Fig. 5). To help address this it was decided to 'open' the old field drains, resulting in the creation of a constantly flowing feature spanning a total length of 835m across the width of the course. Solid pipe was used as a carrier under areas of play such as fairways. The meandering nature of the design has resulted in flow rates fluctuating and slowing at various points. This characteristic has enabled a 'cell' type system to be created (Fig. 6 & 7), enhancing the filtration by macrophytes of any pollutants present prior to water exiting at ground water drains located at the perimeter of the course.

Increasing drainage issues are not solely confined to parkland courses. The venue for this years Scottish Open, Gullane Golf Club is a links course situated on the East coast of Scotland. At one of the highest points of the course, course manager Stewart Duff found himself confronted with an area of land that was becoming increasingly saturated during periods of wet weather, with this eventually encroaching on to a nearby fairway. Unlike Dunnikier, where the rising water table contributed greatly to the problem, at Gullane the underlying geology of the land was hindering free movement of water and subsequent drainage. With no obvious exit point available, Stewart decided to construct a wetland which could act as an outlet for an installed 'herringbone' pipe system (Fig. 8).

From the volume of water contained in Gullane's wetland during winter months and the success of Dunnikier's, it is evident that inputs are not solely from pipe inlets. For a clearer understanding why this is, we need to return to the cohesive properties of water previously mentioned. With a greater volume of water comes a greater 'pull', think along the lines of a magnet. The larger the magnet the greater the magnetic pull, water behaves similarly. Hence, the holding capacity of the wetland created at Gullane has resulted in the drainage of a greater land mass than might have originally been envisaged. 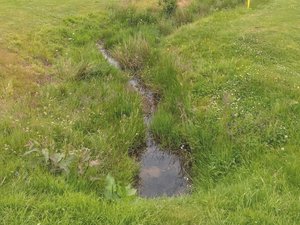 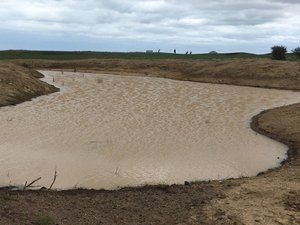 The solutions implemented at Dunnikier and Gullane are great examples of how the objective of managing excessive water levels on your course can go hand in hand with creating value in other areas. The ecology and biodiversity value provided by the wetlands (Fig. 9) and ditches fits in with both golf courses pro active environmental approach, whilst in turn helping to minimise their impact on surrounding fresh water systems. Most importantly though, they have provided practical and financially astute answers to on course problems. Proof that the areas of course maintenance and environmental stewardship can mutually benefit each other.

Often creating a transparent connection between on course maintenance practices and the environment can be difficult. In the case of water, this connection can be made surprisingly simplistically.

Fresh water ecosystems are vital in providing many supporting, provisioning and regulating ecosystem services. These include areas such as clean water, food and biodiversity. Currently, one of the greatest threats to the health of them is through a condition referred to as eutrophication. This occurs when a water body is loaded with elevated levels of nutrients, with the main regulating nutrients being nitrogen (N) and phosphorus (P). Elevated levels of these nutrients stimulates increased primary growth, with the subsequent increase in respiration reducing oxygen availability in the water body which hinders its ability to function. A clear sign of eutrophication that you may have seen is the presence of phytoplankton and cyanobacteria algae blooms on the water surface (Fig. 10).

Whilst in turf maintenance you may encourage nutrition, fresh water systems do not want or require additional inputs of nutrients from foreign sources. As N and P are two macro nutrients predominately used in turf fertiliser programmes, any steps that can be taken to reduce their leaching can only be of benefit to surrounding water bodies. As shown previously, management of water through constructed wetlands and 'cell' ditch systems can assist in regulating and reducing entry of these nutrients in to catchment sources. This is a prime example of the positive impact golf courses can have on external environmental factors. 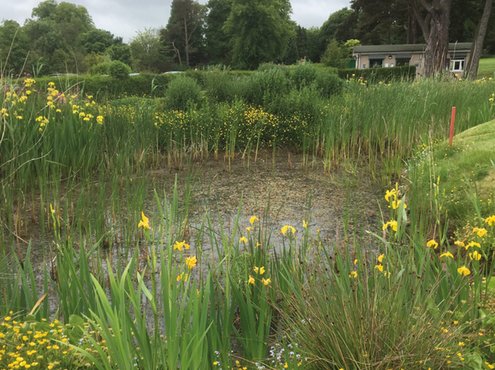 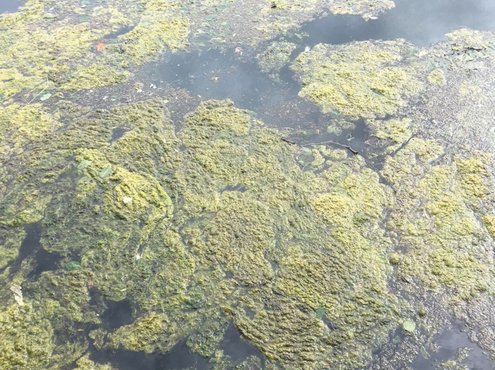 So to summarise, the impact and effects of climate change will continue to be debated in many quarters but one thing that cannot be denied is that weather patterns are changing. To face forthcoming challenges presented by changes in rainfall volume and frequency, the industry must be prepared to learn from other sectors. The status quo will no longer suffice, innovative methods in dealing with water will be required. By recognising that the use of features such as constructed wetlands and flowing 'cell' systems not only help us find solutions for on course issues but also benefits the surrounding environment, progress can be made in both areas. Water tables lowered, flooding and saturation reduced, ecology promoted, and the prevention of nutrient loading in to nearby fresh water systems. The benefits are numerous and of a high value. 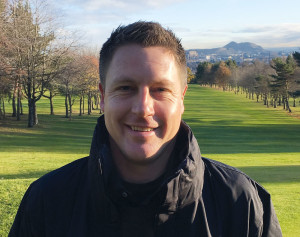 Appreciating the long-term value of water as a finite resource and not as a disposable commodity should encourage greater responsibility in its management. After all, the water that you are dependent on today will be required at some point in time by future generations.