It began when news started broadcasting that West Ham United are due to move to the Olympic Stadium in Stratford from Upton Park in 2016 while Tottenham Hotspur, who have plans for a new stadium next to their current White Hart Lane ground, will have to find a temporary home venue for the 2017-18 season.

They are just the latest clubs to leave their long-established homes - a trend which began in the 1990s and which shows no signs of abating.

So what became of England's lost football grounds?

There are hundreds of flats around the old Highbury pitch and John Jeans lives in one with a view of the famous turf from the old North Bank. However, while this is a dream for many Arsenal fans, Dr Jeans has slightly mixed feelings about it. He is a Chelsea fan.

"I did say to my wife we'd never live at Highbury," he said. "But a year and a half later, because of the practicality (of it), we ended up moving there. The Arsenal fans, they like to point out where (Thierry) Henry scored a free kick or (Dennis) Bergkamp scored that goal. We're very lucky to live in the old stadium.... (But) you feel vaguely irritated by the scene."

The North Bank and Clock End stands were demolished after Arsenal left in 2006, but the facades of the old East and West Stands were preserved, while the pitch became a garden.

Dr Jeans, 30, a season ticket holder at Chelsea from 1997, said there had been "queues of people" at his gated community since he moved there last year. "Every home game at the Emirates (Arsenal's new stadium) there are people huddling at the four corners of the (old Highbury) ground. When someone comes out, they pile in... You have stewards trying to take people out. Before cup finals there are queues of people who come to kiss the old Highbury pitch."

Matthew Cavill was nine years old when the club put one over Sir Alex Ferguson in his first game in charge of Manchester United at the Manor Ground in 1986. "Myself and my brother were taken on a whistle-stop tour of the ground," he said."(Sir Alex) went 'I'm sorry son, but we're going to ruin your day because we're going to win'. (But) I told him in the room we would win 2-0 and we did."However, it was the opposite emotion at the final game there against Port Vale in 2001 before the site became The Manor Hospital.".

After Middlesbrough's Ayresome Park ground closed, Robert Nichols, editor of the fanzine Fly Me To The Moon, decided to live in a house built on the site of the former ground. Boro's old home is not forgotten, though. About 10 bronze sculptures were made to show where key parts of the ground were.

Now, 17 years after the last game, the site owned by developers St. Modwen is a fenced-off field awaiting planning permission for new housing. The former Stoke City social club opposite the ground's main entrance - at one time a scooter garage - is also derelict.

For further lost football grounds and where they are now read the full BBC article (Part I) here.

Then Manchester City left Maine Road in the city's Moss Side area in 2003, taxi driver Gaz Stevenson decided to take a bit of the old ground back with him.He had bought his old seat online for £12.50. Homes were built at the famous old ground with its wide pitch, but Mr Stevenson, 32, still has a family connection there.Gibson's Green, a "big circle of grass where the centre circle was", is named after his great-great uncle, long-serving head groundsman Stan Gibson. He said: "Stan was a real big character. Mike Summerbee, at the opening of Gibson's Green, said Stan was one of the main reasons he signed for City.

He remembers the ground's famous "Roker Roar" when "the place just rumbled". Fan Paul Dobson remembered the famous "Roker Roar" coming from the packed terraces. Now the site of Roker Park's centre spot is clearly marked at the junction of Promotion Close and Midfield Drive in an housing estate. 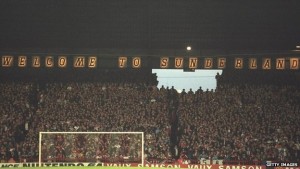 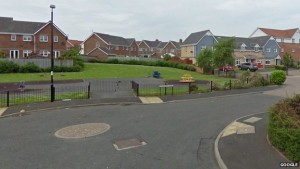 The feature explores other famous forgotton grounds such as Derby County which clsoed in 1997, Millwall: The Den, which closed in 1993 and the Brighton & Hove Albion which also closed in 1997.

More information and what happened to these other forgotton grounds can be found on the BBC article (Part II) here.