0 What happens when the Wanderer settles down

Back in 2001 many things in my life changed, the biggest of them all, was the decision that I had met the right girl and was to marry.

This in turn signalled the end of my travels, troubleshooting grounds maintenance for clubs, it was time to find a nice Sports ground and bed my feet in. The rest of that story you will know from my last article.

What followed that article were several people asking me about my work and what it is like to take over troubled or "politically correct wording sites with poor sports facilities that need remedial attention."

Well it is fair to say Hampton School is an example to many schools in the country, it sets an example that few see but readily admits it has made errors along the way. The school appreciates that rectification will require financial commitment and requires professional people to manage the sports facilities.

What is Hampton School and of what do the grounds comprise? It is an independent school with 8-football pitches, 4 rugby pitches 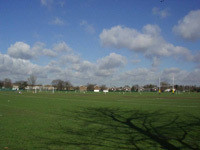 and 6 cricket squares and the obligatory gardens and lawns.

Machinery and facilities since my arrival have all been updated but more about that later on.

So what have I taken on? I am lucky in some areas; I have 3 very eager and hard working members of staff, sadly I have playing surfaces that have suffered, over time not from neglect but lack of knowledge, or as some may also understand it, 'Chairman of the greens knowledge.'

First day in and I have a quick look at the machinery first, not bad, much of it has seen better days but hey not too unusual, just wondering if the jet washer and grease gun get much use, and by the look of the shiny dip stick it has not been pulled out many times for an oil check. I decided it would be best to find out when the machinery was last given a good check over etc. That long eh! Oh well, we best start now, better late than never! Now how to do it?

I created a machinery check sheet system that requires updating daily as well as a weekly summary, I waded through the machinery books and updated them, it took a week but hey the system now works.

My next point of call was the Cricket squares, which had not yet been re-seeded! It's only the middle of October but at least I get to see it through then. Some quick calls to a few old friends and I had one seeder coming in on demonstration. I hope to own it by January but I want to see if it can cut the mustard unlike the current model in the shed.

Top dressings are already in stock, the weather's holding and the day to work is upon us. Two days later, we have six cricket squares over seeded and lightly top-dressed.

A few days later the soil results are back with some very interesting findings. It seems that the previous consultants have missed the point. The analysis shows that we have high sand content in the upper root zone of the cricket squares. At 52% sand content it may have been an easy mistake to make, surely they can't have overlooked this, nah it must be me!

Then again, at least the squares have now been re-graded and de-thatched; at least the ball will hit the sandy loam surface nice and cleanly.

Getting towards the end of the month now and a new Tractor arrives along with a Terraspike. Hopefully now we can get some air into the ground as well.

Aeration has gone to plan along with the feeding of the grounds. I have put a liquid feed of Magnesium (mg) for the lovely new sprouting grass on the cricket squares. I forgot to mention a secret ingredient in my armoury but then in a fairly short time you will hear a lot more about it.

Next up is the staff appraisals, I need to ascertain where we stand knowledge wise etc. The appraisals went Ok, gave me the chance to find out more about the staff and their requirements.

With the recent wet weather, the Grounds are getting pretty wet and starting to resemble mud baths. It's high time to start upsetting a few people so here goes, "that game is off and that one and that one."

A quick check in the middle of the month and the cricket squares are doing really well now.

It's time for me to look at the current cost of consumables. Interestingly there's not much in the way of discount, especially taking into account the stock levels we have, the reps must have been very excited coming in here.

More aeration has been done and there is lots of divotting still to be done.

All round not a bad month.

Not much happening this month, so time to review the appraisals and take a look at staff training levels. A couple of the lads have been on courses, so why is their knowledge so poor? They are learning well at the moment and things are on the up so I'll hold the enquiry in abeyance, though others may not.

Machinery checks are being done regularly, jobs planned and executed so things are on the turn. With weekend overtime now sorted out, staff starting to accept things do change, a nice picture is emerging.

Christmas is just days away now, a break for all the staff and some useful planning time for me. 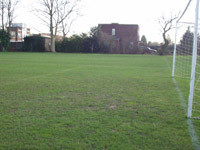 The month of many changes is now upon me. We have a new building to move into and the arrival of the new machinery is just days away, things are still going the way I want, well they were, until it snowed the day before school returned to term time.

On the phone again, more rock salt is needed but the main suppliers are flat out to get us a delivery as usual so it's up to our product supplier, it won't be that much dearer will it? I should have known, it is double the price; that will teach me!

At least when the next lot of snow fell a week later we had ample in stock. I have to say at this point that my staff, during the snow, worked very hard in difficult conditions and my deputy even came in early without being asked.

Seed quotations have now been requested and are now eagerly awaited, one surprise though we will be paying less this year even with two increases in seed price, it's amazing the difference in price when shopping around.

Time now for us to move into our new home, a garage and new mess room complete with toilet and shower facility (and I do not mean a leaking roof). 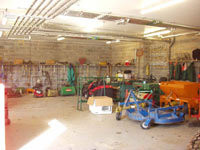 Just to add to the fun we also had a sports committee meeting, which unexpectedly went very well, perhaps that's because we do not have a Chairman of the Greens on it.

Still having problems out on the cricket squares, time for another tactic-hydro jetting and ice. Make the holes fill with water- hard frost- water expands- better aeration. I'll let you know how well it worked when we get closer to the season.

Time to spend a bit of time on the last few machines that need attention before the main season starts.

I need to modernise our machine to a spray line marker, for the cricket boundaries that would be good.

Got a bit more aeration done and the Amazon flail mower popped out for a couple of days to tidy the place up a bit around the edges.

The sports ground is still under attack so to speak, 1000 boys plus footballs at break time, then the games lessons and lest we forget, the actual fixtures. 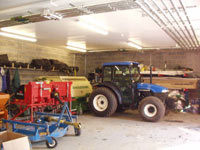 I always wondered why people said that Grounds maintenance is only busy for 9months of the year must only be for a specialist Groundsman because it is not quiet here that's for sure. At least we'll never be bored.

All round the last 3 months have been very successful, we now have grass on the cricket squares, although currently under disease attack but at least it is grass. I have put forward proposals along with the IOG to bring an understanding of how sports turf is created, explaining how so many variables compete to make up the final surface.

I have completely overhauled how the Grounds staff operate and a new prospectus is beginning to appear. The new machinery garage is 'state of the art' along with most of the new equipment inside it. The balance between new and old being employed heavily, the roller that has worked hard for so many years finally has had the ballast emptied out of it (hey if you don't know any different), the database of works is up and running along with the new risk assessment policy.

Grass seed quotes have arrived and orders have been placed, this is of course after every seed mixture had been broken down and analysed. Plus I've had a survey of the entire sports ground to ascertain the levels, and get quotes on some re-grading work.

So how do you get it all done? It's quite easy really; you need a lot of dedication, and staff willingness and have the complete backing of your employers. It also helps to have a facilities manager that wants to work with and for you.

So what does March hold for us? A lot of hard work and more eye opening events as the Sports ground at Hampton School continues to reveal it secrets.